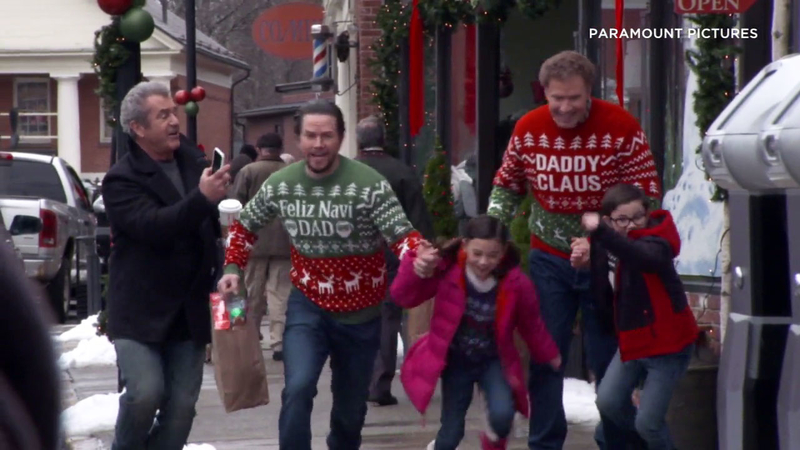 LOS ANGELES (KABC) -- In the new comedy "Daddy's Home 2", Will Ferrell and Mark Wahlberg star as two men who thought they had figured out how to "co-dad" their blended families.

But when their own fathers come home for the holidays, they start to doubt their idea of a happy-together Christmas.

John Lithgow and Mel Gibson join the cast as their on-screen fathers, and from the start, everyone knew this casting was a perfect fit.

"We knew at the table read," Wahlberg said. "We were sitting together, and Mel was on my right and John was on his left. They started reading and it was like..." Ferrell joined in saying, "Mark and I were like 'This is going to be easy! They can do all the work.'"

"But I remember that table read very well," Lithgow said. "We launched into that table reading about 10 minutes after I met this guy (Gibson) and Mark for the very first time. I knew Will a little bit cause we'd both been in a movie together. We just hit the ground running. We started having fun and we never stopped."

"Yes, it was fun all the way to the last minute," Gibson added. "It was hard to break for lunch."

Ferrell and Wahlberg are also producers for the comedy sequel.

"I think we're just excited that it's a funny movie that's heartwarming at the same time, that you can definitely bring the whole family to," Ferrell said. "It kind of celebrates the dysfunction and the beauty of the holidays all in one."

Sean Anders returned from the original film to direct the sequel, as the actors appreciated the amount of space he gave them to just "play."

"They had to curtail some of it for the sake of time," Gibson said. "But hopefully they picked the best bits. There's a lot of great stuff on the floor that's just off the wall."

"You know, we'll shoot what's on the page and we still have half the day left," Wahlberg said. "So it's like, 'OK, let's see if we can find some gems!'"