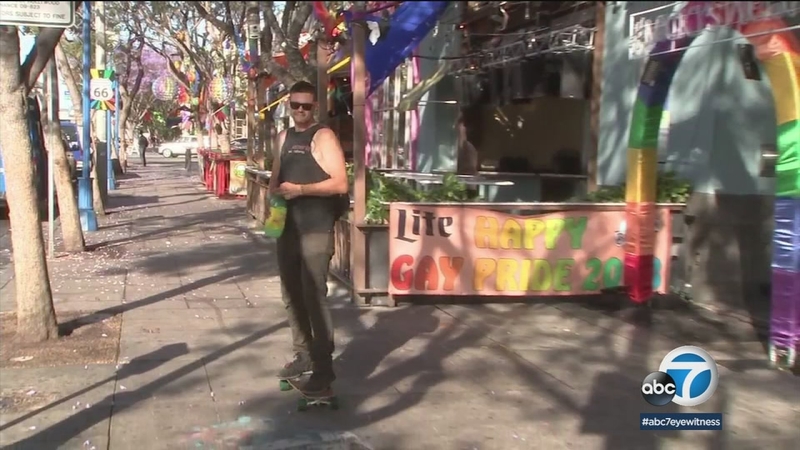 WeHo streets clean after thousands turn out for Pride

WEST HOLLYWOOD, Calif. (KABC) -- Clean up crews wasted no time getting to work after the 48th annual LA Pride Parade, raking up trash and power washing sidewalks after hundreds of thousands of revelers descended on West Hollywood's streets for the weekend celebration.

"For people to come together and there not be any major incidents - people getting along - it was really nice," said festival-goer Jonathan Young of West Hollywood.

Young couldn't believe how quickly the streets transformed. He said he couldn't skateboard along Santa Monica Boulevard earlier because of the heaps of trash.

"It's a completely different place," Young said. "It was like a post-apocalyptic war zone, literally like an hour ago, and now it's back. Just another day in West Hollywood."

"We're used to doing this. Every year, we get two very large Southern California events. Halloween night, of course, in the city of West Hollywood, and then Pride," Duran said. "We've been doing this now for almost 50 years, so we've kind of gotten used to how to do the day after."

"I think people really wanted to be together, have a day of an overdose of pixie dust and glitter and gay day in West Hollywood, and they got that living in flamboyant color," Duran added. "And I think we'll see this continue in the future."

The weekend's events were packed to the brim.

City officials say it was the first time in LA Pride's decades-long history that the festival reached capacity and organizers issued an apology after ticket holders were turned away.

William Sibley was one of them. He stood in line for four hours after flying all the way from Miami.

"I know it's a big event, and it gets packed and busy, hectic and everything, but everyone should have a chance to experience it," Sibley said.

Those turned away were given the option of exchanging their tickets for other events, or requesting a refund. Duran said the city will work with organizers to make sure it doesn't happen again.

"It's a quality problem. Too many people wanted to come, and what they're accustomed to are people coming to the festival and circling in and out," Duran said. "So, they tend to oversell capacity, but this time people went in and stayed and they didn't go out."
Report a correction or typo
Related topics:
community & eventswest hollywoodlos angeles countylgbtqparadelgbtq pridegay rightspride paradelgbt
Copyright © 2021 KABC-TV. All Rights Reserved.
More Videos
From CNN Newsource affiliates
TOP STORIES