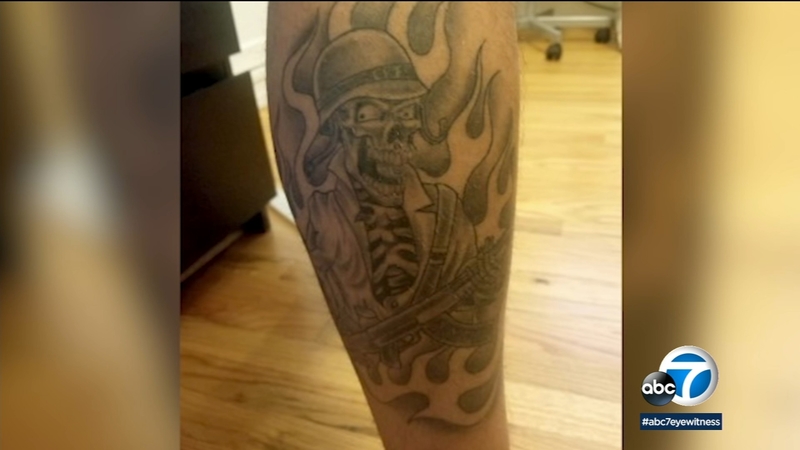 LOS ANGELES (KABC) -- "Inking parties" are a secret ritual to initiate deputies into the alleged "Executioners" gang in the Los Angeles County Sheriff's Department, according to a sworn deposition testimony by LASD Deputy Art Gonzalez.

According to Gonzalez, deputies earn the right to join the Executioners gang through violent acts like beating or shooting someone during an arrest.

As a reward, he said, deputies are branded with what he described as the gang's tattoo - a flaming skeleton wearing a helmet and holding an AK-47.

"So, we call them "ink chasers" because they're out there trying to show the rest of the members, the rest of the inked members that they're worthy of the tattoo," says Gonzalez.

A deputy with the L.A. County Sheriff's Department says he endured five years of "bullying and intimidation" by members of a gang of deputies at the Compton sheriff's station known as the "Executioners."

Gonzalez's testimony is part of a federal civil rights and excessive force lawsuit against the LASD by Sheldon Lockett, a former high school football standout who alleges Deputies Mizrain Orrego and Samuel Aldama called him the n-word and violently rammed the end of a police baton into his eye socket during an arrest in 2016.

The deputies said they believed Lockett matched the description of a shooting suspect.

Lockett was charged with attempted murder and spent eight months in jail before a witness recanted her identification and prosecutors dropped all charges against Lockett.

Deputies Aldama and Orrego have denied using the n-word during his arrest and say the force they used was justified because they believed he had a gun, even though no gun was ever found.

Gonzalez testified that both deputies were "chasing ink" in the hopes of joining the Executioners during Lockett's arrest.

"Yeah, they were chasing ink," says Gonzalez. "Deputy Aldama is part of this group. It's not a secret. I mean, everybody knows that he is inked."

Three weeks after charges against Lockett were dropped, Deputies Aldama and Orrego shot and killed Donta Taylor during a foot chase. The deputies also said Taylor had a gun, but again, no gun was ever found.

"We call it, you know, a ghost gun," testified Deputy Gonzalez. "Or a ghost 417 because there never was a gun."

The Los Angeles County District Attorney's Office determined that Deputies Aldama and Orrego had a "reasonable belief" that Taylor was armed and declined to file charges in Taylor's death, but the county paid Taylor's family $7 million to settle their wrongful death lawsuit.

During that lawsuit, Deputy Aldama testified in a deposition that he was one of between ten and twenty deputies at the Compton station with the same tattoo Gonzalez has described as being the Executioners tattoo.

In Aldama's deposition, John Sweeney, the attorney for Taylor's family, asked Deputy Aldama about the tattoo on his right leg.

"What else does that tattoo have on it?" asked Sweeney.

"It has flames," Aldama responded.

"It's holding a rifle," said Aldama.

"The skull is holding a rifle?" Sweeney asked.

Deputy Aldama also admitted that getting the tattoo must be "earned."

Both deputies deny any wrongdoing and deny any involvement in a gang or clique.

Orrego testified in a deposition that he was fired from the department in 2017 for an unrelated incident.

Deputy Gonzalez also identified other deputies he said have sought initiation into the Executioners gang.

Gonzalez testified that Deputy Miguel Vega and his partner were "chasing ink" this June when Vega shot 18-year old Andres Guardado five times in the back killing him. Deputies said Guardado was armed and a gun was found at the scene. Their attorneys called the accusations of chasing ink "appalling and false."

In his deposition, Deputy Gonzalez alleged the Executioners have controlled the Compton station, used illegal arrest quotas and even falsely reported seeing a gun to justify violence.

"I now call them a gang, because that's what gangs do," testified Gonzalez. "They beat up other people... their focus is not their job. Their focus is their group."

Sheriff Alex Villanueva insists there are no gangs in the department, but admits some "deputy cliques" have caused problems in the past. He points out that he is the first sheriff to impose a policy that forbids subgroups and cliques in the department, although critics say he's done little to enforce the policy.

"These deputy cliques that did cause problems in the past, yes they did exist," says Sheriff Villanueva who adds that he believes the cliques don't meet the "legal definition" of a gang.

"We come across it, we'll address it, we're not going to strip down the entire department to look for tattoos."