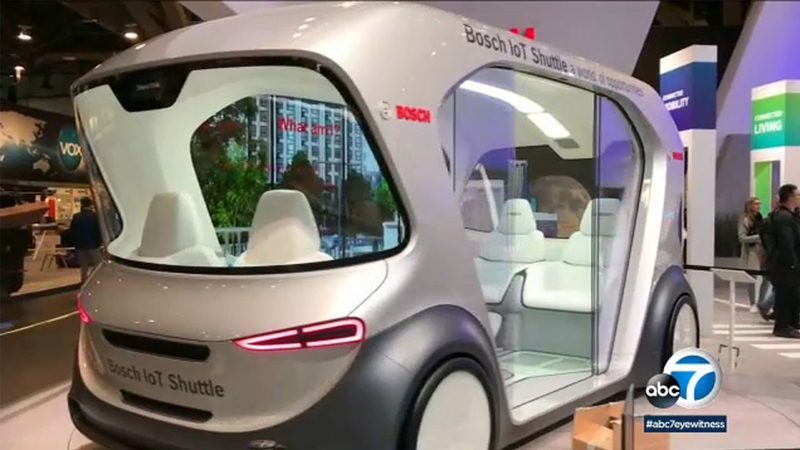 LAS VEGAS (KABC) -- The Consumer Electronics Show is billed as the largest consumer electronic trade show in the world, and for decades it has been the place where new technology is unveiled. Since new cars have all kind of technology in them, the event has become a major auto show as well.

Audi brought something really new to Las Vegas, and this time, it's not for the driver.

"Currently we are still focusing on drivers a lot. But in the future, the passengers and even today, the passenger is a relevant target group as well, so why shouldn't they enjoy the ride," said Nils Wollny, the head of digital business at Audi.

Audi has formed a startup company called Holoride, which developed some virtual reality technology. The car you're riding in creates the motion for a VR experience, and it all syncs up via software.

ABC7's car specialist Dave Kunz got a demonstration, and he was immersed in a Marvel video called "Rocket's Rescue Run," riding in the back seat while an Audi e-tron went around a small race track, generating the sensations.

Disney was involved in helping Audi with the technology.

"We love experiences. That's what we do; we're an experience company. So the car gives us a new opportunity to take advantage of what's great about being in a moving vehicle. You can't do that with a simulator," said Mike Goslin, vice president of games and interactive experiences for Disney.

Neither Disney nor Audi has an exclusive on the technology. It will be marketed to entertainment and auto companies by the startup, Holoride, starting next month.

Bosch is a company that supplies tech to the auto industry. The car you drive right now may even have components developed and made by Bosch. Now, Bosch has created a prototype for a driverless shuttle, a solution to many urban problems, using the tech from their arsenal.

"These will be coming to the roads soon. And at Bosch we're producing a lot of the components and sensors, and then now the services that will allow this automated and connected shuttle service in many cities" said Mike Mansuetti, the head of Bosch's North American operations.

What about an autonomous vehicle for use where terrain is a problem? Hyundai's new concept vehicle called Elevate can get to wherever someone might need to be rescued. Its wheels are at the ends of arms that can articulate and crawl up hillsides or over debris at the scene of a natural disaster.

"Imagine a tsunami. A vehicle right now can only get to the tsunami disaster, and the rescuers have to then get out and crawl over the debris to get to the stranded individuals," said David Byron, the design manager for Sundberg-Ferar, the firm that helped develop the prototype for Elevate.

Hyundai is one of many auto companies creating a separate technology division to look at future needs and develop ideas to meet those needs.