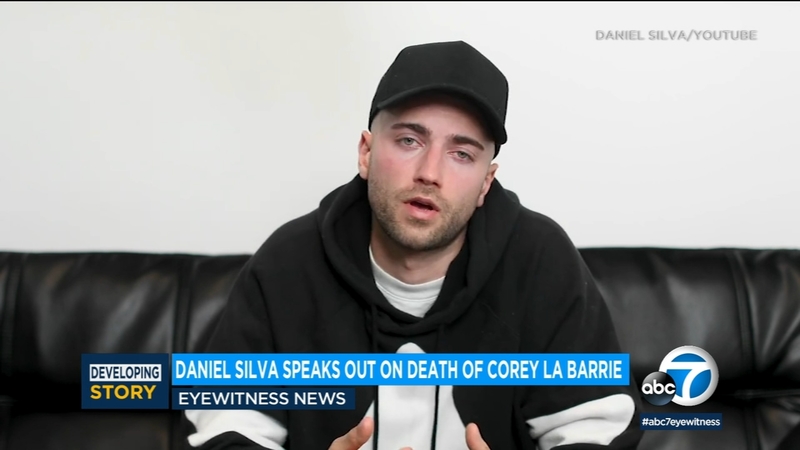 LOS ANGELES (KABC) -- Daniel Silva, the "Ink Master" tattoo artist who was sentenced in the crash that killed popular YouTube star Corey La Barrie, is for the first time speaking about the case.

On May 10, 2020, Silva was driving a McLaren sports car with La Barrie as the passenger, on La Barrie's 25th birthday, when they crashed in Valley Village. La Barrie died and Silva was hospitalized with serious injuries.

Authorities held Silva responsible for the crash and he eventually entered a no-contest plea to manslaughter and was sentenced to 364 days.

Silva posted an emotional YouTube video on Tuesday expressing deep remorse for the fatal crash, talking about his long friendship with LaBarrie and saying how grateful he is the LaBarrie family wrote the judge asking for a reduction in charges.

Silva's video can be viewed here.

A few months after the crash, he said, the La Barrie family's attorney wrote a letter to the judge asking the charges of second-degree murder be reduced to manslaughter in light of new information about the crash. Among that new information, the letter said, was an examination of past crashes due to possibly dangerous road conditions that had occurred in the same area and an acknowledgement that LaBarrie had recently bought the exotic sports car and was not fully familiar with its power.

Silva said La Barrie was one of the first people he met when moving to Los Angeles and considered him one of his closest friends.

"It's hard to cope with the fact that his absence will leave a void in hundreds of thousands of people's hearts. Especially to the people who had the privilege to know him personally."

"And I will always cherish every single moment I had with him."

At the time of the crash, Silva, then 26, was a popular tattoo artist who had been featured on the show "Ink Master" and had a heavy social media following, including more than 1 million followers on Instagram.

Tattoo artist Daniel Joseph Silva was sentenced to 364 days in jail after entering a no-contest plea in the car-crash death of YouTube star Corey La Barrie.