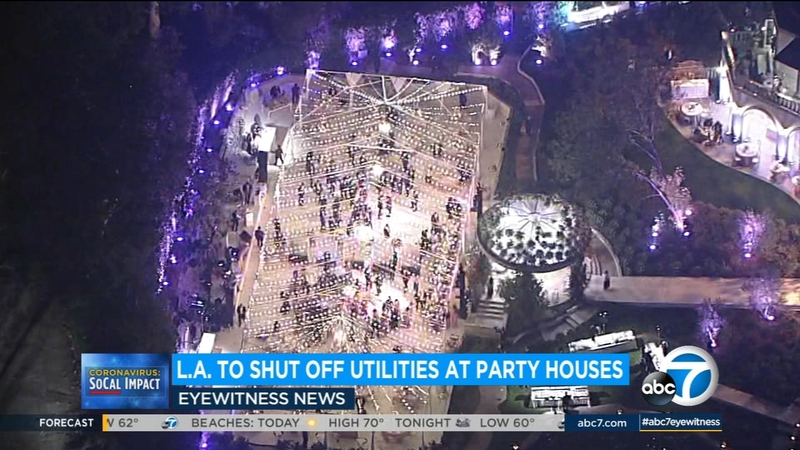 LA threatens to shut off utilities at 'super-spreader' house parties

LOS ANGELES (KABC) -- Only few hours after Mayor Eric Garcetti announced the City of Los Angeles would go as far as shutting off utilities to houses hosting parties during the pandemic, AIR7HD captured a large gathering Wednesday night in Holmby Hills where a massive wedding was held with only a small number of people wearing face coverings and practicing physical distancing.

"These are focused on people determined to break the rules, posing significant public dangers and a threat to all of us," Garcetti said. "Some research has shown that 10% of people cause 80% of the spread. These 'super-spreader' events and 'super-spreader' people have a disproportionate impact on the lives that we are losing, and we cannot let that happen."

Monday night's house party on Mulholland Drive in the Beverly Crest neighborhood was allowed to go on for hours before it ended following a shooting that left a 35-year-old woman dead. The Los Angeles police responded to the home earlier, but said they couldn't shut it down because it's on private property and no laws had been broken at the time.

"It's one thing if 15 people got together. That even has the potential to be disastrous, but hundreds of people in an enclosed space is very problematic and if we allow these to happen, they'll just keep happening," said Los Angeles City Councilmember Paul Koretz.

Both parties occurred in Koretz's district who says the city needs to unify its messaging so that the LAPD can do more.

"There's a bit of a hesitancy on the part of the LAPD to have confrontations and large scale confrontations in the aftermath of the weeks of protests following the terrible death of George Floyd," said Koretz.

Parties and other gatherings are prohibited in Los Angeles County.

Trial lawyer Mark Geragos says it's legal for the LAPD to shut down these parties even if they're on private property, but says shutting off water and power is against the law and will get the city sued.

"They've got the ability to break it up, so to speak. They can disperse it. They can declare it an unlawful assembly. There's all kind of actions that have traditionally satisfied due process. The government just can't turn off your utilities without giving you some right to be heard. I know it has a certain allure when you say it, but it doesn't make any sense," said Mark Geragos, trial lawyer from Geragos & Geragos.

The party in Holmby Hills took place at a mansion that was rented out specifically for the wedding. Koretz told ABC7 an investigation is underway and the city attorney may attempt prosecution.