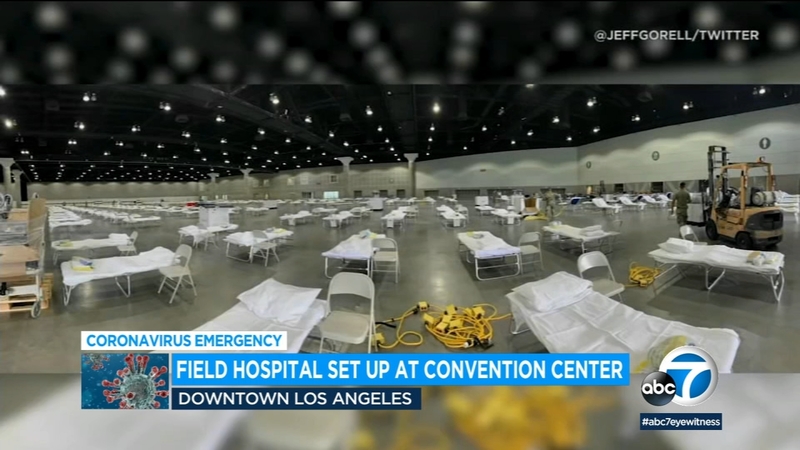 LOS ANGELES (KABC) -- A transformation is underway inside the Los Angeles Convention Center as members of the National Guard set up dozens of beds, preparing the center for use as a federal field hospital in response to the coronavirus pandemic.

"A federal medical station led by the U.S. Department of Health and Human Services, which dropped off that equipment and we unpacked it this weekend," said Los Angeles Mayor Eric Garcetti during a press conference on Sunday.

At New York City's Javits Convention Center, the National Guard was staffing a similar field hospital. The U.S. Army Corps of Engineers set up the site in just a few days.

There were more than 33,000 coronavirus cases in New York. The city's hospitals were swamped with sick patients.

With cases of the virus increasing in Los Angeles County, officials are bracing for a surge in patients at Southern California hospitals.

"We think that if we are following the trajectory that New York City has shown us over these past few weeks that we're going to need a lot more hospital beds that we don't currently have," said Los Angeles County Supervisor Janice Hahn.

Volunteers in the medical field are being sought to implement the local effort, which is being led by the Department of Health and Human Services in partnership with the National Guard.

One major source of help is the U.S. Navy hospital ship Mercy. The 1,000-bed ship is docked at the Port of Los Angeles and started accepting patients.

The Mercy's medical staff will care for people who do not have COVID-19, allowing hospitals in the Los Angeles area to focus on treating patients with the infection .

"We're starting with medical, supplies and cots so we can relieve some of the pressure on nearby hospitals," he said.