'Make sure I wake up. I have a daughter.' After 2 months unconscious, Inglewood COVID-19 survivor reunited with family

Cheers echoed through an Inglewood hospital as a COVID-19 survivor was reunited with his family.
KABC 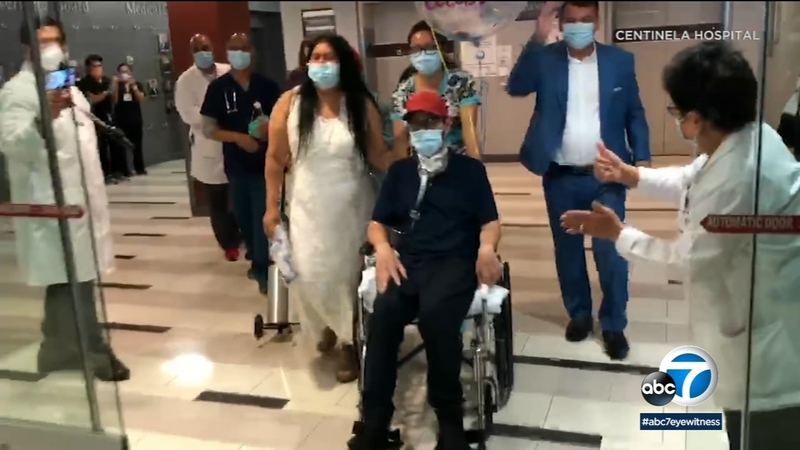 After 3 months at Inglewood hospital, COVID-19 survivor reunited with family

INGLEWOOD, Calif. (KABC) -- Cheers echoed through Centinela Hospital in Inglewood as COVID-19 survivor Michael Orantes was finally ushered back into the arms of his family.

It had been touch-and-go for the 32-year-old construction worker who was hospitalized for 93 days.

The head of the hospital said that Orantes battled a "catastrophic storm."

Orantes descended quickly after a trip to Spain. He was on a respirator, unconscious for over two months.

He's from a devoutly Christian family. His mother calls his awakening a resurrection.

"We give thanks to God that he has done a miracle to our son Michael," said Pedro Orantes.

The patient prayed for for a miracle, too. He thought about his 2-year-old girl, Elizabeth, who missed him at home.

The outlook was dire in the moments before he was intubated. He mustered a plea.

"He said, 'Make sure I wake up. I have a daughter.' So that crushed me. Heartbreaking," said Dr. Anna Carchi with Centinela Hospital.

Orantes' medical team did not take a single day off at this community hospital for 90 days.

The hospital doctor says it was their moral duty.