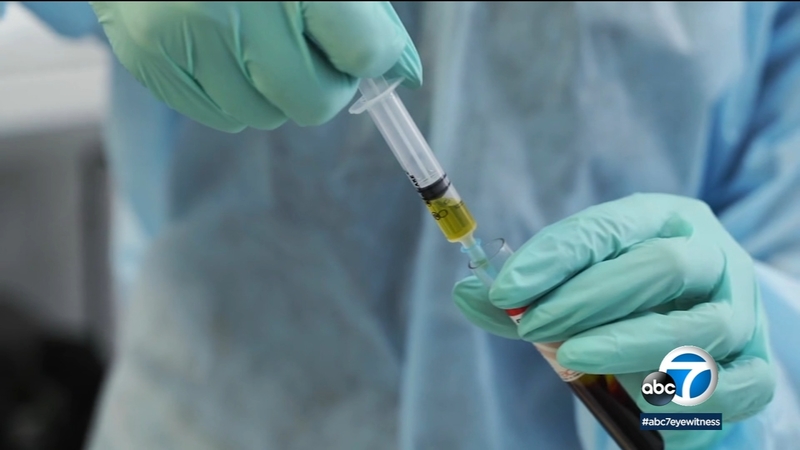 LOS ANGELES (KABC) -- As soon as the first COVID-19 case was identified here in the United States, the quest for a treatment began.

In Washington state on January 21st, a man in his 30s who returned from Wuhan, China became the first reported COVID-19 case in the U.S. He recovers giving scientists an opportunity to search for a treatment.

"And they took the convalescent plasma from that patient and isolated several antibodies," said Dr. Peter Chen, the Director of Pulmonary and Critical Care at Cedars-Sinai Medical Center.

The antibodies in this patient's plasma could be infused to help two or three patients, but Chen said researchers knew they could create something much more powerful to help many more.

"They can manufacture the antibody and mass produce it," he said. Chen and his colleagues are testing lab-created mono-clonal antibodies from that very first patient in a phase one clinical trial. The immune system can use these antibodies to seek and destroy the virus.

"In this case, what it does is the antibody binds to the virus and prevent the virus from entering the cell," he said, "And as such, then it can't replicate itself in the cell."

It's a method long studied in the fight against cancer, rheumatoid arthritis and even asthma. Dr. Chen says while other anti-viral medications such as Remdesivir were developed to fight other diseases such as Ebola, this drug is specific to Covid-19. The drug called LY-CoV555 is being tested on patients with severe disease, but Chen said, "The next phase of this is to move this to an outpatient setting. And so, the hope is that we can treat patients really early on with the virus with this drug and help them reduce their viral load."

Ely Lilly and biotech company AbCellera are developing this drug, but other companies are also testing mono-clonal antibody therapies.

"In the absence of a vaccine. This is a very good first step in heading that direction and I really hope that it does work," Chen said.

One drawback: These types of medications are very expensive to develop and costly to use.

Chen said, "Right now, I think we really just need to find something, because it's hard to put a cost on a life."