After spending months at Centinela Hospital, Michael Orantes survived COVID-19. A year later he paid a visit back to the hospital.
KABC
By Ashley Mackey 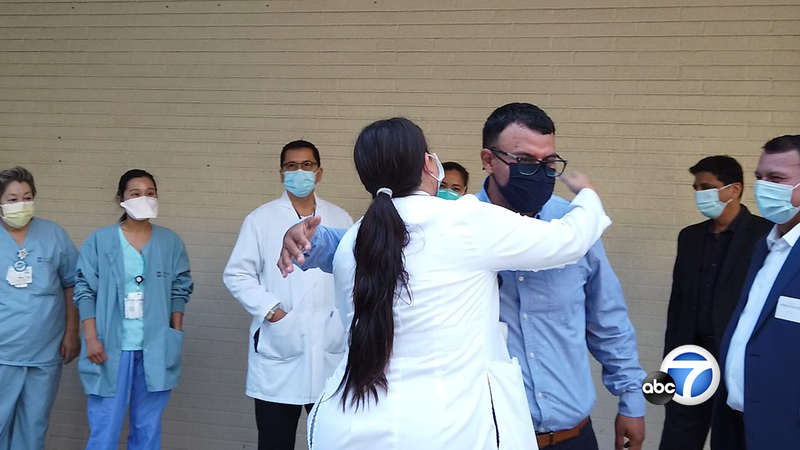 More than 90 days later, after having both his lungs collapse, needing to be intubated and being unconscious more than two months, the 32-year-old was finally discharged.

"It looked like it was going to be tough for me to recuperate back to my normality," Orantes said. "But thanks to God and my family who helped me out a lot."

A year after being released, now 33 years old, Orantes said he's regained the weight he lost and relearned how to walk and talk. He said he's thankful to be back around his family, including his new wife and 3-year-old daughter.

"I feel blessed that God has made this miracle happen for my son, Michael," Micahel's father, Pedro Orantes said in Spanish.

"I told myself I have to push myself every day to get to that point where I could be with my daughter," Orantes said.

After surviving COVID, Orantes and his family said there was no hesitating when it came to finally being able to get the vaccine.

"Even though people say I'm immune to it," Orantes said. "Because if the vaccine can protect us, stop this virus from spreading, then I'm not going to have a doubt that I'm going to get the vaccine."

"We know that a lot of people have doubts about the vaccine and how fast it was made," said Dr. Paryus Patel, the Chief Medical Officer of Centinela Hospital. "But given the odds and the risks that we have, the risk of not taking a vaccine is a lot higher."

Orantes and his family returned to Centinela Hospital in July to thank all the doctors, nurses and staff that helped him recover.

"For those that are going through a tough situation with a loved one at this moment," Orantes said. "Just maintain faith and encourage our nurses and doctors that they will help you go through this situation."