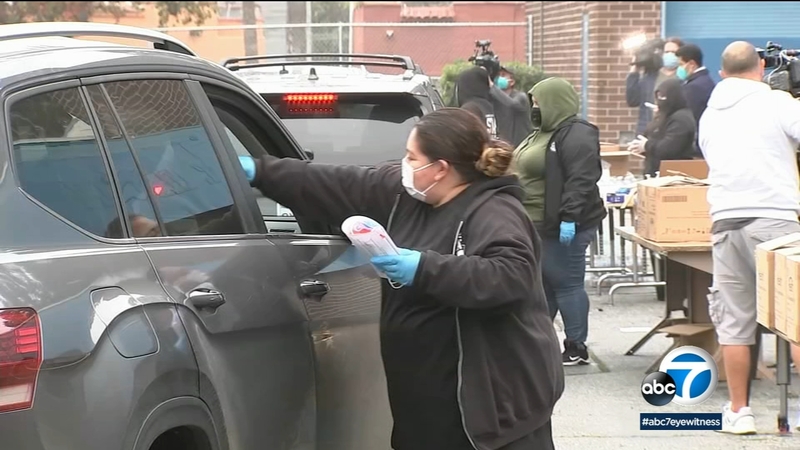 When Patrick Kennedy, a nightlife performer in New York City, recently was exposed to COVID-19, he was desperate to find more rapid tests to not only monitor his health but track when he'd be able to return to work.

"It's impossible to find COVID tests because of the shortage in the city," said Kennedy, who works hourly to pay his bills. "I want to get back to work but need to make sure I'm taking the right precautions and not exposing anyone else."

After standing in long lines at testing centers and visiting pharmacies to buy rapid tests, to no avail, he came across an Instagram post from someone he went to high school with who was offering to sell them to people directly: $20 for each test, plus a $5 delivery fee -- cheaper than some tests found in pharmacies. Kennedy bought five.

He is among a growing number of people who've turned to sites such as Instagram, Facebook, TikTok, Craigslist, LinkedIn and eBay in search of an at-home COVID test as they sell out at drug stores across the nation and lines at testing centers can be hours-long.

Kennedy's former classmate, Joey, an electrician who asked to not share his name for privacy reasons, bought a stash of 100 test kits from his friend who works at a healthcare company.

"I have to get tested for work, so it was getting very annoying to have to wait at urgent care for three hours, and sometimes, not even get one," Joey told CNN, noting he's paid $45 for two tests at pharmacies. "It just wasn't sustainable."

After purchasing them in bulk -- 100 tests for $900 (about $9 each) -- he began offering them on Facebook and Instagram to people in his local community. He said he sold 25 in one night, and 45 the following day; many of which were strangers and parents, who needed tests to send their kids back to school after the winter break. I was one of them.

A scarcity of COVID tests

After a long winter break, my son was set to resume preschool on Monday morning. A negative COVID test was required, and the only one we had came back inconclusive. While we self-isolated in the days prior, panic washed over me: Where would we find another test amid a shortage in the New York area in time for school the following day? After seeing Joey's post on a local parenting Facebook group, I had one 45 minutes later without ever leaving the house. I was left with many questions: Was this ethical? Is the test even real?

"I'm not looking to make a killing," Joey later told me. "I had access to the tests -- I wasn't hoarding or overbuying them at a drug store -- and it's almost criminal that people are waiting in lines for hours in the cold, probably getting sicker. I decided to deliver them straight to houses."

Facebook told CNN Business it prohibits the sale of test kits across our platforms and has a system for regulators and law enforcements to report behavior they believe is unlawful or against our rules. eBay, TikTok and Craigslist did not respond to a request for comment. LinkedIn's policy is to take down any posts that aim to sell any items, whether it's tied to the pandemic or not.

Gov. Gavin Newsom proposed spending another $2.7 billion to expand testing and boost hospital staffing, while calling for a new law to give workers more paid time off if they get sick.

The emergence of COVID test resales comes as frustrated Americans struggle to get tested and face long lines amid an increased demand following holiday travel and gatherings.

Amazon, CVS Health and Walgreens are limiting the number of at-home COVID kits customers can purchase. Walmart recently hiked the prices for some of its rapid COVID tests from $14 to $20 for two.

Experts say reselling kits in small numbers and without a large markup price is not illegal -- nor is purchasing these products -- but there are risks, for both buyers and sellers.

"We've received reports that unauthorized sellers are trying to profit from the pandemic by selling COVID-19 tests online," wrote Washington DC Attorney General Karl Racine in a tweet on Tuesday. "Please beware and only buy tests through authorized retailers do you can ensure the integrity of your test."

The Federal Trade Commssion recently published guidance around how to avoid buying fake COVID tests online, such as vetting the buyers, paying by credit card to dispute the charge if scammed and only buying kits approved by the Food and Drug administration.

The Biden administration recently vowed to distribute 500 million free at-home tests, but it's unclear when a website will launch for Americans to request these tests and how soon they'll be shipped out. A senior government official told CNN last week it is "working through all the details. And we'll have those in the coming weeks."

The administration also said reimbursement for at-home testing will begin next week through insurance companies.

An opportunity for another pandemic secondhand market

In the meantime, Joey is doing brisk business. But his efforts were met with mixed reactions; some people on Facebook criticized how he'd make a profit by reselling of tests, others came to his defense: "This kid isn't price gouging at all and he's taking an opportunity to make things easier for people. He's even willing to deliver -- geez!"

Ultimately, Joey's post was taken down by the group's moderator. He wasn't notified why.

Arthur Caplan, a professor of bioethics at New York University's Grossman School of Medicine, said the trend has also emerged on his local Facebook parenting group in Connecticut.

"A black market skewing the availability of testing toward those who can pay is completely a reflection of government failure at the national and state levels to provide adequate testing," he said. "Am I surprised that a black market has started to flourish? Not in the least. There are many places that say you can't come here unless you've had a negative test, but there are no tests. That's called, by most black market people, an opportunity."

Beyond issues of equity, buying COVID-19 tests from strangers is subject to fraud -- people don't know who they are or what they're really offering.

"It's unethical to price gouge in the face of panic and in the face of shortage, but it will go on," Caplan said. "As for people buying them, what are they gonna do? They can't find tests any other way. I cannot blame someone for wanting to protect their child, but you have to then remember the person who sells you something on the black market could sell you something that's not going to work."

This isn't the first time a secondary market has emerged during the pandemic. In the spring of 2020, a shortage of protective gear ignited a secondary market. "We used some of it (at the NYU hospital), but oftentimes it would tear, rip or wasn't up to manufacturing standards," Caplan said. "Sometimes the black market people took the money and never delivered it at all."

It's also not the first time these issues of scarcity and equity have played out during the pandemic. Early last year, concierge healthcare provider One Medical came under investigation for allowing friends and family members of its executives and its wealthier clients to skip the line to get a vaccine.

Although reselling COVID-19 tests is not overtly illegal, Jessica Rich, a former FTC official who worked on consumer protection issues, said if there is some collusive behavior occurring between entities or individuals, or some deceptive claim that is made in connection with the sales, then perhaps some state laws, the FTC Act -- which prohibits unfit or deceptive practices -- or the Unfair, Deceptive or Abusive Acts and Practices (UDAAP) law could apply.

"If someone is selling a small number, like a couple dozen, a federal agency isn't going to bring action against someone doing this at that scale, especially if they're open about the price," Rich said.

However, pandemic profiteering could potentially end badly for sellers. In the early days of the pandemic, Matt and Noah Colvin rose to infamy for hoarding and selling hand sanitizer. Marketplaces like Amazon and eBay pulled their listings and warned others they could lose their accounts. They ended up with over 17,000 bottles and nowhere to sell them, according to the New York Times. (One of the brothers later expressed regret and donated supplies to charity.)

One Craigslist seller, who asked to remain anonymous, said they began reselling tests after waiting in line for hours, missing work and paying a premium for PCR results without insurance, hoping to earn some of his money back. "I do feel a bit crummy inflating the price, but COVID has screwed my work up and I need to pay rent," the listing said. "Had to call 50+ pharmacies on the drive from DC to find these." The seller told CNN Business they would personally "pay double to not deal with the lines and get results quickly if it was available."

Some, like Joey, have gotten kicked out of Facebook groups. Russell Schwartz and his wife Katherine Quirk-Schwartz, a nurse, run a South Florida Facebook page that connects people with COVID-19 related resources. In recent weeks, they shifted some of the group's focus from helping people find vaccines to assisting members with locating home test kits. Schwartz said he's kicked people out of the group for attempting to sell tests.

"Our greatest fear is individuals praying on our group because of size, population and demographic of older users," Quirk-Schwartz said.