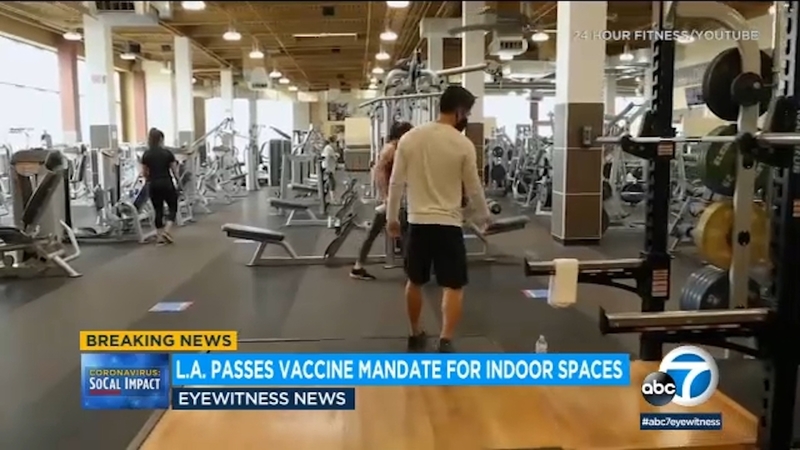 The mayor's approval came just hours after the Los Angeles City Council passed the measure considered one of the strictest in the nation.

While the measure takes effect 31 days after the mayor's signature, the city will begin enforcement as of Nov. 29.

The city already requires full vaccination or a proof of a negative COVID test for "mega events," which includes events such as sporting events and concerts attended by more than 10,000 people.

The new vaccine mandate passed with 11 votes Wednesday morning, which was just short of the 12 votes need to pass with an urgency clause allowing it to take effect immediately. Retail establishments, including grocery stores and pharmacies, are not included.

Since voting 13-0 on Aug. 11 to request the ordinance be prepared by the city attorney, a majority of council members have expressed support for the measure that would require proof of vaccinations before entering many indoor public spaces.

After signing the measure Wednesday, Garcetti said: "Vaccinating more Angelenos is our only way out of this pandemic, and we must do everything in our power to keep pushing those numbers up."

"These new rules will encourage more people to get the shot, and make businesses safer for workers and customers - so that we can save more lives, better protect the vulnerable, and make our communities even safer as we fight this pandemic."

Two agencies will carry out enforcement starting in late November: the LA County Department of Public Health and the City of Los Angeles Department of Building and Safety.

California will soon require all students in both public and private schools to get the COVID-19 vaccine once the shot is fully authorized by the FDA.

He invoked a City Council rule to withhold unanimous consent, effectively preventing the council from voting on the ordinance on its first reading.

"Making a teenager ... serve as a bouncer to keep people in or out of a restaurant, and then fining the business for their failure is not the way to go about it," he said.

Buscaino also noted the conflict between city's measure and county's vaccination mandate, which only covers patrons and workers at indoor bars, wineries, breweries, lounges and nightclubs.

Councilmen Bob Blumenfield, Mike Bonin and Paul Krekorian expressed concern about details in the ordinance in the past, including a lack of enforcement, but noted that it was imperative that the requirement goes into effect quickly, and that the details can be fixed later.

"All those concerns being said, we can't delay a day longer. We need to advance forward with an ordinance that is going to protect people from their fellow citizens who are making a choice not to be vaccinated,'' Krekorian said.

People would be exempt from the mandate if they have medical conditions that restrict their ability to get vaccinated or a "sincerely held religious belief,'' which will be reviewed by the location the person is trying to enter.

People who are exempt would be able to use outdoor areas of the location, but if unavailable, they may be allowed to enter the indoor area by providing proof of a negative COVID-19 test.

Comparing L.A.'s mandate to other municipalities

While Los Angeles County continues to see falling numbers of COVID-19 hospitalizations and other metrics, the pace of residents being vaccinated remains relatively stagnant, and Ferrer has warned that the pandemic will only end if that pace quickens.

According to the U.S. Centers for Disease Control and Prevention, fully vaccinated people can still contract COVID-19 and transmit it to others, although they are far less likely to develop symptoms, require hospitalization or die from the virus.

There is some evidence that fully vaccinated people will likely spread the more contagious delta variant of the virus for less time than unvaccinated people, the CDC says.