Mayor Steve Hofbauer believes no city employee or resident should be forced to get vaccinated.
KABC
By Leo Stallworth 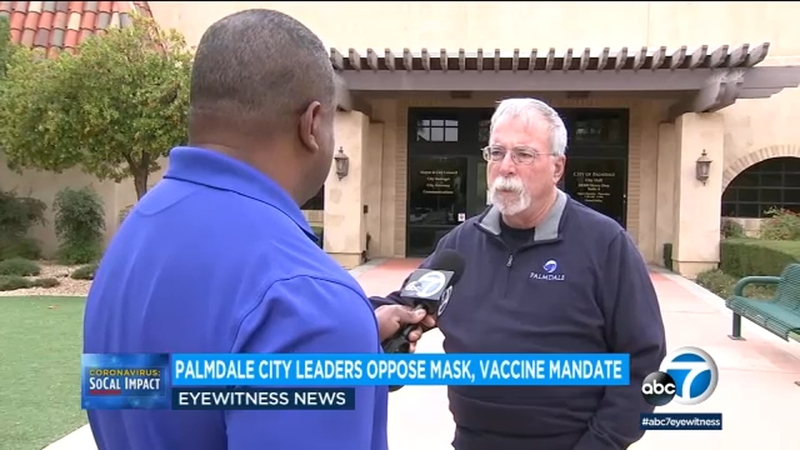 PALMDALE, Calif. (KABC) -- The city of Palmdale is pushing back against Los Angeles County's vaccine requirements.

The mayor argued that whether for medical, religious or personal reasons, no city employee or resident should be forced to get vaccinated.

The city of Palmdale has roughly more than 300 employees. The mayor said most of them are vaccinated, and those who are not can get tested twice a week at the free county clinic. The mayor said if someone chooses not to get vaccinated for whatever reason, he will not fire the employee.

"I don't think that the city manager would do that, especially based on the council's pretty solid and stated opinion on this issue," Hofbauer said.

The mayor said he's not encouraging residents to defy the mask and vaccine mandates, but the city is instructing the city attorney to investigate means of legally challenging the L.A. County Public Health Department's orders regarding vaccination and how the council could best state its stand against them.

Palmdale resident Lynsey Freeze is fully vaccinated, but she sides with the city against mandating employees be immunized.

Freeze said if someone is comfortable without their mask, then they should not wear it.

"Personally, I do what I'm told, but I know everybody has their own thoughts and I just hate to see people lose their jobs," Freeze said.

Other Palmdale residents had mixed feelings.

"I think people are still getting sick and still spreading, so I think we should be a little more cautious," said resident Jeff Mills.

Resident Jeff Logan believes getting vaccinated is a personal choice.