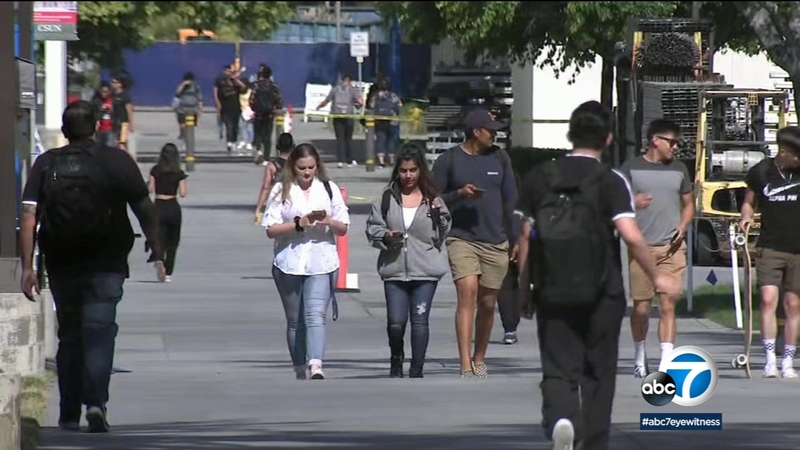 NORTHRIDGE, LOS ANGELES (KABC) -- The California State University, Northridge community was on high alert Thursday after a threatening message was written in a university bathroom.

The campus remained open, but students were instructed to report anything they knew about the threat found scrawled in the bathroom stall referencing when students are scheduled to take finals next week.

CSUN student Yvette Hernandez found an email sent from the university about the threat in her junk mail.

In December, the university investigated a different kind of threat made on social media that was directed toward the campus pride center.

"It's kinda scary when they're so graphic sometimes. Like last time, it was super, super graphic and nasty and I do think that it's important for them to investigate and try their best to keep everyone safe," student Jennifer Garcia said.

Police at Long Beach City College on Thursday dealt with a person seen with a gun on campus that turned out to be a theatre prop.

The concern over the most recent incident is linked to the shooting at the University of North Carolina at Charlotte on Tuesday in which two people died and four were hurt.

CSUN police is not providing specific details about what was written in the threat, but the chief of police said the department is moving forward in ensuring they re-focus efforts on campus.

"We have an increase in patrols that our community will see both on foot and on bicycle," Chief Gregory Murphy said.