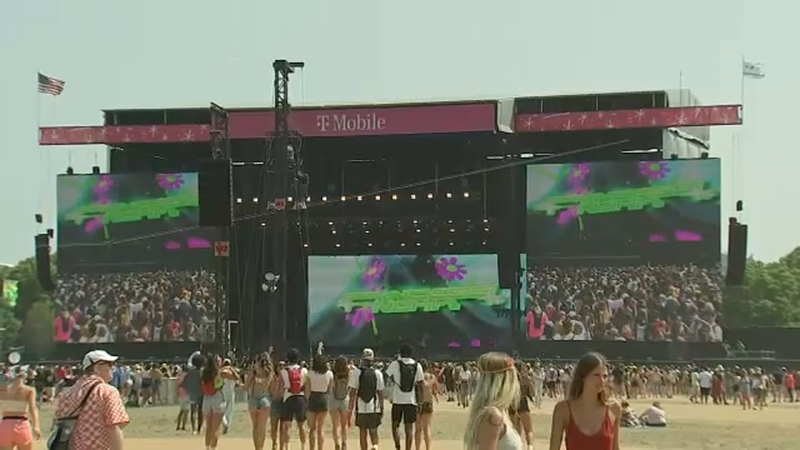 Will Lollapalooza stay in Chicago?

CHICAGO -- DaBaby will no longer be performing at Lollapalooza Sunday night following homophobic comments he made onstage at last week's Rolling Loud festival in Miami.

In a Tweet, Lollapalooza organizers said "Lollapalooza was founded on diversity, inclusivity, respect, and love. With that in mind, DaBaby will no longer be performing at Grant Park tonight."

Lollapalooza was founded on diversity, inclusivity, respect, and love. With that in mind, DaBaby will no longer be performing at Grant Park tonight. Young Thug will now perform at 9:00pm on the Bud Light Seltzer Stage, and G Herbo will perform at 4:00pm on the T-Mobile Stage. pic.twitter.com/Mx4UiAi4FW

Young Thug will perform in his place at 9 p.m. on the Bud Light Seltzer Stage, and G Herbo will perform at 4 p.m.

RELATED: Lollapalooza Sunday: Music festival to wrap up as one of city's largest events since pandemic

Elton John, Madonna, Questlove and others have come out to condemn the rapper's comments from the Rolling Loud music festival.

During the performance, he made false and insulting comments about gay men and HIV, and spoke crudely about women, as well.

John, who is gay and a longtime HIV activist, took to Twitter to say "We've been shocked to read about the HIV misinformation and homophobic statements made at a recent DaBaby show."

"This fuels stigma and discrimination and is the opposite of what our world needs to fight the AIDS epidemic," he tweeted before offering up some factual data about HIV. "Homophobic and HIV mistruths have no place in our society and industry and as musicians, we must spread compassion and love for the most marginalised people in our communities. A musician's job is to bring people together."

Madonna also shared her "message" to DaBaby on social media, posting a video of his remarks on her Instagram account and writing "If you're going to make hateful remarks to the LGBTQ+ community about HIV/AIDS then know your facts."

"After decades of hard won scientific research- there are now life saving medicines available to children born with HIV, to people who contract HIV through blood transfusions, dirty needles or exchange of bodily fluids," she wrote. "These new ARV's can keep a person with AIDS alive for the rest of their lives!!! AID's is not transmitted by standing next to someone in a crowd."

Demi Lovato, who recently went public that they are nonbinary, shared a post from makeup artist and activist Matt Bernstein about the danger of DaBaby's comments on their Instagram account.

Singer Dua Lipa, who collaborated with the rapper on a remix of her song "Levitating," said in a statement on her Instagram stories Tuesday that she was "surprised and horrified at DaBaby's comments."

"I really don't recognize this as the person I worked with. I know my fans know where my heart lies and that I stand 100% with the LGBTQ community," she wrote. "We need to come together to fight the stigma and ignorance around HIV/AIDS."

Musician, producer and filmmaker Questlove posted on Instagram an updated dream list of whom he would have play an updated "Summer of Soul" festival with DaBaby's name scratched off the list.

"Somebody Gotta say it: Homophobia/Transphobia/Xenophobia/Misogyny/Racism - this should go w/o saying is morally wrong," Questlove wrote.

But at least one celeb has spoken out on behalf of the rapper.

"If you gonna have the Lil Nas X video and him living his truth, you gonna damn sure have people like DaBaby who gonna speak their truth," fellow T.I. said on Instagram about rapper Lil Nas X being openly gay. "Ain't nothing wrong with none of it. It ain't got to be no hate. It's all honesty. Everybody living in their truth."

CNN has reached out to reps for DaBaby for comment.