Over the past 10 years, DACA has faced many legislative challenges.
KABC
By Sid Garcia 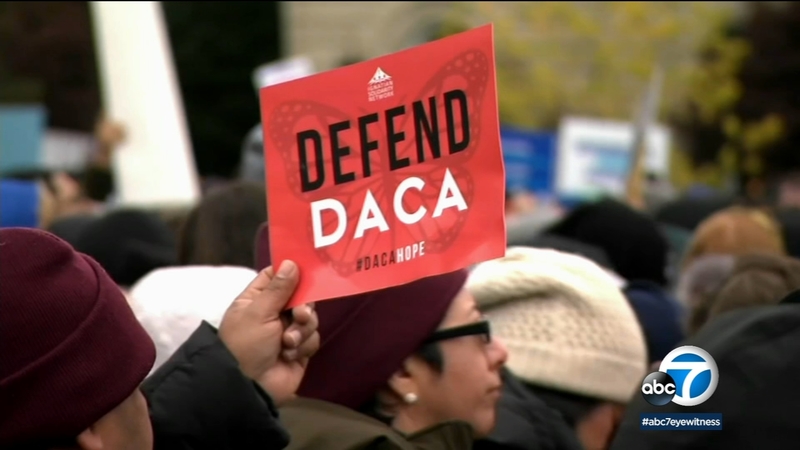 LOS ANGELES (KABC) -- In 2012, the Obama administration introduced the Deferred Action for Childhood Arrivals (DACA) program, protecting all eligible immigrants who came to the U.S. as children from deportation.

"This is my home," said Cristian Bolis, a DACA recipient who was brought to America by his mother when he was an infant. "Home is here."

Bolis, like many other DACA recipients, see Wednesday's anniversary with mixed emotions.

Over the past 10 years, DACA has faced many legislative challenges.

Elected officials from Southeast Los Angeles along with volunteers and program applicants commemorated the 10th Anniversary of DACA. One of the speakers, Deyanira Nolacco, said she's still waiting for her DACA status after completing all of the paperwork.

The Department of Justice's appeal to that decision now makes its way to the 5th Circuit Court of Appeals.

Meanwhile, immigration reform is stalled in the Senate.

Diana Escamilla told Eyewitness News she had hoped Congress would have acted more urgently, and include a policy that has a pathway to citizenship.

"I'm exhausted, but I'm also very happy and hopeful because this is a testimony of all of the activism and organizing that the youth, and students, and workers have had along all these years to get DACA to happen and to keep DACA and now we're fighting for a pathway to citizenship," she said.

DACA has promised security to over 835,000 recipients, according to the U.S. Citizenship and Immigration Services.

Jose Lopez with Dream Act L.A. was a part of the original group that helped produce the framework for DACA.

"I assumed DACA was only going to last a year or two and then we were going to have a pathway to citizenship, but we are here 10 years later," said Lopez.

Ten years ago today, I stood by President Obama as we carried out one of our proudest accomplishments. On this 10th DACA Anniversary, we celebrate the transformational impact it’s had on hundreds of thousands of young people.

It's time for Congress to make this permanent now. pic.twitter.com/03GyhwRtae

In a video message released on Wednesday, President Joe Biden is standing by dreamers, urging Congress to come up with legislation that includes a path to citizenship.

"Dreamers are friends and neighbors and Americans in every way except on paper," he said. "It's time to provide them with the permanent protections they deserve. I made it clear in my State of the Union that we need to provide a pathway to citizenship for dreamers. I continue to call on the Congress to pass a bill that so I can sign it immediately."

Although DACA does not provide a pathway to citizenship, the last line of defense in the fight for protection is the anticipated American Dream and Promise Act. If signed into law, the bill is set to provide an official pathway to citizenship by granting permanent resident status for 10 years to qualifying undocumented immigrants.