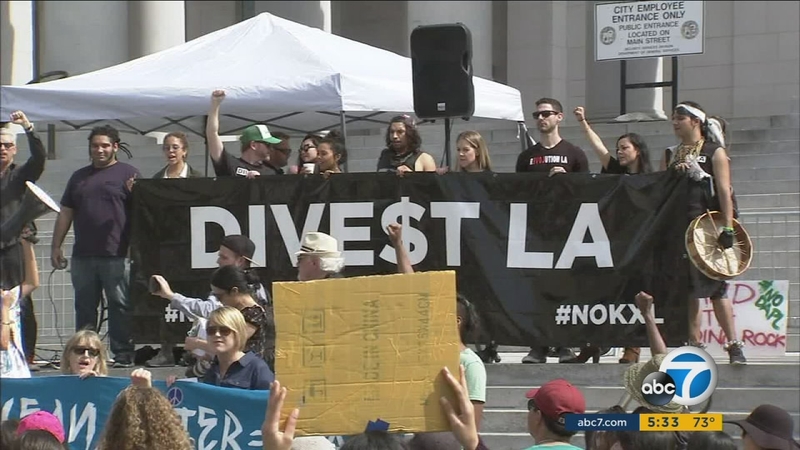 LOS ANGELES (KABC) -- About 100 people marched from Pershing Square to the Financial District in downtown Los Angeles protesting the construction of the Dakota Access Pipeline.

The demonstrators stopped for a short rally in front of a Wells Fargo Bank. Divest L.A. organized Friday's march and rally, singling out the bank for its part in funding the pipeline project.

Protesters asked the Los Angeles City Council to do what Seattle did - sever ties with Wells Fargo.

"We're encouraging the city of L.A. to end their relationship with Wells Fargo and to adopt a new responsible banking ordinance that will raise a higher standard for the kind of banks that we do business with," protester David Calvillo said.

In a statement to Eyewitness News, Wells Fargo said the following, in part:


"Wells Fargo values our relationship with the city of Los Angeles... We want to stress that Wells Fargo is one of 17 banks financing the Dakota Access Pipeline -- less than five percent of the total funding. That said, we are a company committed to environmental sustainability and human rights, and respect all the opinions being expressed on this issue."
President Donald Trump signed an executive order overturning an Obama administration order stopping the construction of the pipeline. Demonstrators said the pipeline goes over sacred Native American land and threatens the water supply to millions of people.