Witness describes how people helped each other during Dallas shooting 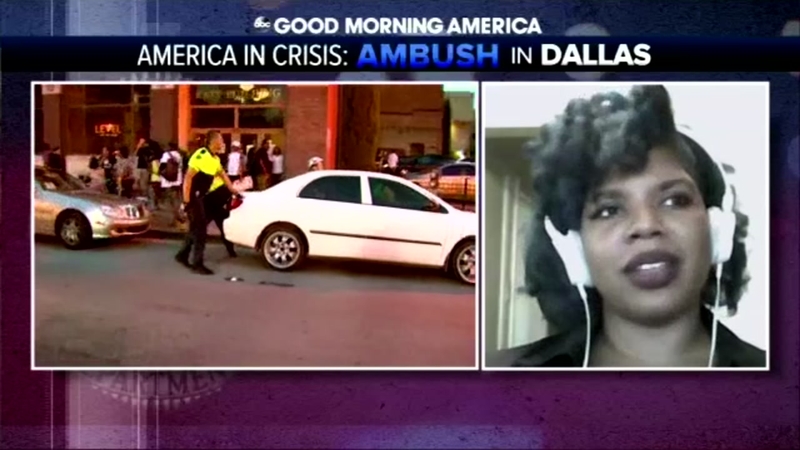 Dallas shooting eyewitness talks about how people helped others to safety

An eyewitness says that, in the midst of the chaotic scene in Dallas on Thursday night, bystanders took care of each other, making sure people who had fallen did not get hurt.

"I was scared they were going to be trampled, but people would literally stop and help people up and move them to the side," said Sharay Santora, who spoke with Good Morning America on Friday.

At least five police officers were killed and at least nine other people shot when officers were ambushed while on duty at a protest against police brutality. This was following a week in which two black men, Alton Sterling in Louisiana, and Philando Castile in Minnesota, were killed by police.

Santora, a former Marine, was participating in the protest with her two children. She said the evening started out with a peaceful protest, and the police were friendly with the participants.

"They [the police officers] were really comforting us and being there for us and supporting us in our march," she said.

The protestors had been chanting "hands up, don't shoot," when the shots rang out, Santora recalled. She said initially, they thought the noise was fireworks, but when it continued, people started trying to get away.

"Everyone began to scatter," she said. "I was arm-in-arm with my children and I said, 'Don't run. You have to stay calm.'"

The scene turned chaotic as those around her continued to scatter, though some were staying in place, trying to figure out how to regroup, she said.

That's when people started to fall over, but others made sure they were not injured in the confusion, she said.

Santora also stressed the importance of kindness in the wake of the tragedy.

"We have to remember that no matter how upset we are, and how angry, we have to remain moving forward, we have keep love in our hearts, and we have to fight for justice," she said. "And justice isn't an eye for an eye and a life for a life."
Related topics:
dallas police shootinggood samaritangood morning america
Copyright © 2021 KABC Television, LLC. All rights reserved.
TOP STORIES
Thieves target Home Depot in Lakewood, making off with tools
UK, Germany, Italy report cases of new omicron variant
324 people in Riverside County received COVID vaccine frozen too long
Christmas tree prices higher this year due to drought, worker shortage
Retired cop dies after being shot while working security for TV crew
Support local shops on Small Business Saturday
Officer struck pedestrian, drove home with body: Prosecutor
Show More
Black Friday seemed almost normal: Sales increase 30% from 2020
1 dead after shots fired at Valley Village hotel
What is omicron? What to know about new COVID variant
Recent flash mob robberies bring out more security for Black Friday
Ahmaud Arbery's mother speaks out after murder trial verdict
More TOP STORIES News