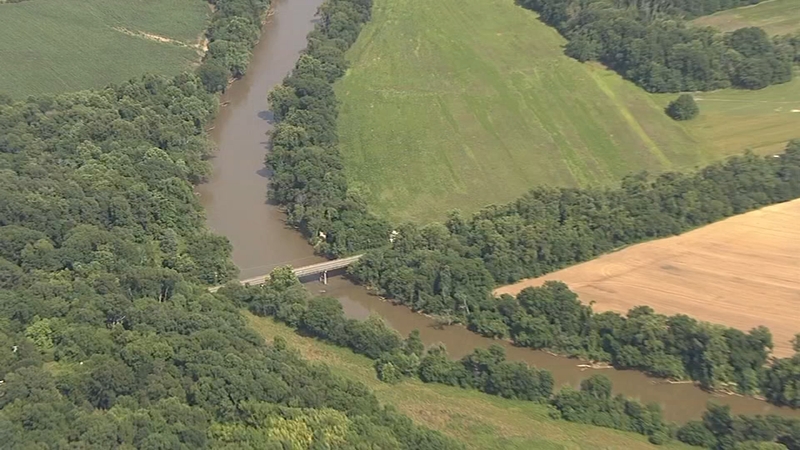 EDEN, N.C. -- Three people are dead and two others -- including a 7-year-old boy -- are still missing after a group on inflatable tubes went over a Duke Energy dam along the Dan River in Eden, North Carolina, authorities said.

The Rockingham County Sheriff's office said nine people went tubing Wednesday evening on the Dan River but at some point, several of the tubes came untied and some floated over the Duke Energy dam around 7 p.m.

Authorities said a Duke Energy Plant employee called 9-1-1 on Thursday afternoon to report some people may be in danger on the river,

Three bodies were found Thursday night, according to the Rockingham County Emergency Services Director Rodney Cates. Numerous rescue boats and helicopters from the North Carolina Highway Patrol and AirLife out of Virginia joined the search.

The three people found dead were identified as Bridish Crawford, 27, of Eden, the mother of some of Rueben Villino's children, Antonio Ramon, 30, of Eden, and 14-year-old Sophie Wilson, of LaPorte, Indiana.

"We're going to stay positive that we can do a rescue rather than a recovery," Cates said about the two remaining missing tubers. They are looking for 30-year-old Thressa Villino, the sister of Rueben Villino and 7-year-old Isiah Crawford, who is the son of Crawford.

Officials resumed the search for the two others Friday morning. The investigation runs from Rockingham County all the way to the Virginia borderline.

"We have done both an air and water search at this time. We've had an aircraft that has flown the river. They flew 6 miles into Virginia, they came back widened their perimeter and flew the ground area adjacent to the river," Cates said.

Officials said all the people were related and were visiting family in the area.

Tubing is a "regular activity" in the area, but people are discouraged to tube near the dam considering there is a "pretty steep drop" over the dam, authorities told ABC News.

There are warning signs posted on the river near the dam, authorities said,