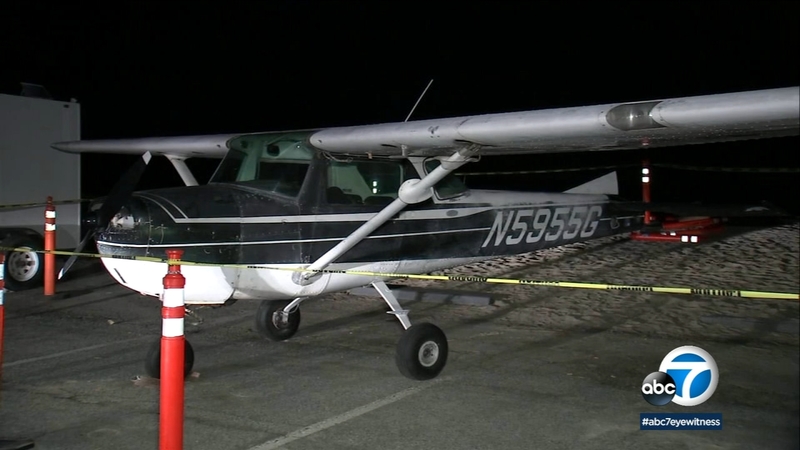 DANA POINT, Calif. (KABC) -- A small plane made an emergency landing on a beach in Dana Point Saturday, startling some beachgoers on the sand.

The pilot and passenger in the 1969 Cessna were uninjured when the plane went down. It happened about 2:15 p.m. at Doheny State Beach, according to the Orange County Fire Authority.

Though no one on the ground was harmed, it was a close call for Faith Lawson and her husband, Nick Hoffman.

"My husband, who was closer to him and could hear better, was ducking and turning, so I ducked too," Lawson said.

The pilot told authorities he had just taken off for what was supposed to be a leisurely flight from John Wayne Airport when the plane lost power. The lucky pilot landed on an empty stretch of sand.

Dana Point: Emergency landing of a small Cessna airplane. No injuries to pilot or passenger. No injuries on the ground. pic.twitter.com/irrPFdb7Ej

Hoffman said he was impressed with the pilot's ability to control the aircraft as it bounced on the sand and rocks.

"I'd say it was about 100 feet behind us when I turned and looked at it, and it was about 30 foot up over our heads as it came down," he said.

The plane came to a stop at the edge of the surf and close to a troop of Boy Scouts.

"He climbed out on his own, the greeting of throngs of Boy Scouts there -- they were very excited -- and they pushed the plane onto the sand," Hoffman added.