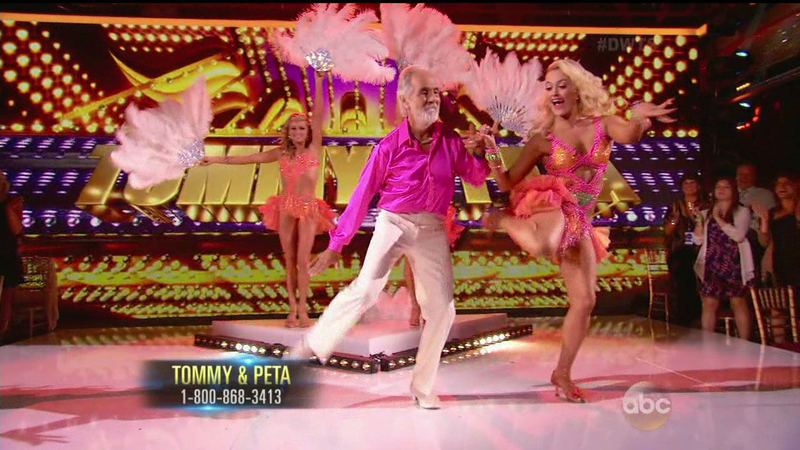 LOS ANGELES (KABC) -- The 12 remaining couples on "Dancing With The Stars" hit week two of season 19 with a vengeance. They performed a wide variety of styles but the real catch this go-round was that the celebrities got to choose the song. Their favorite music ranged from Jason Aldean to Wilson Pickett, Gloria Estefan and Carly Rae Jepsen. 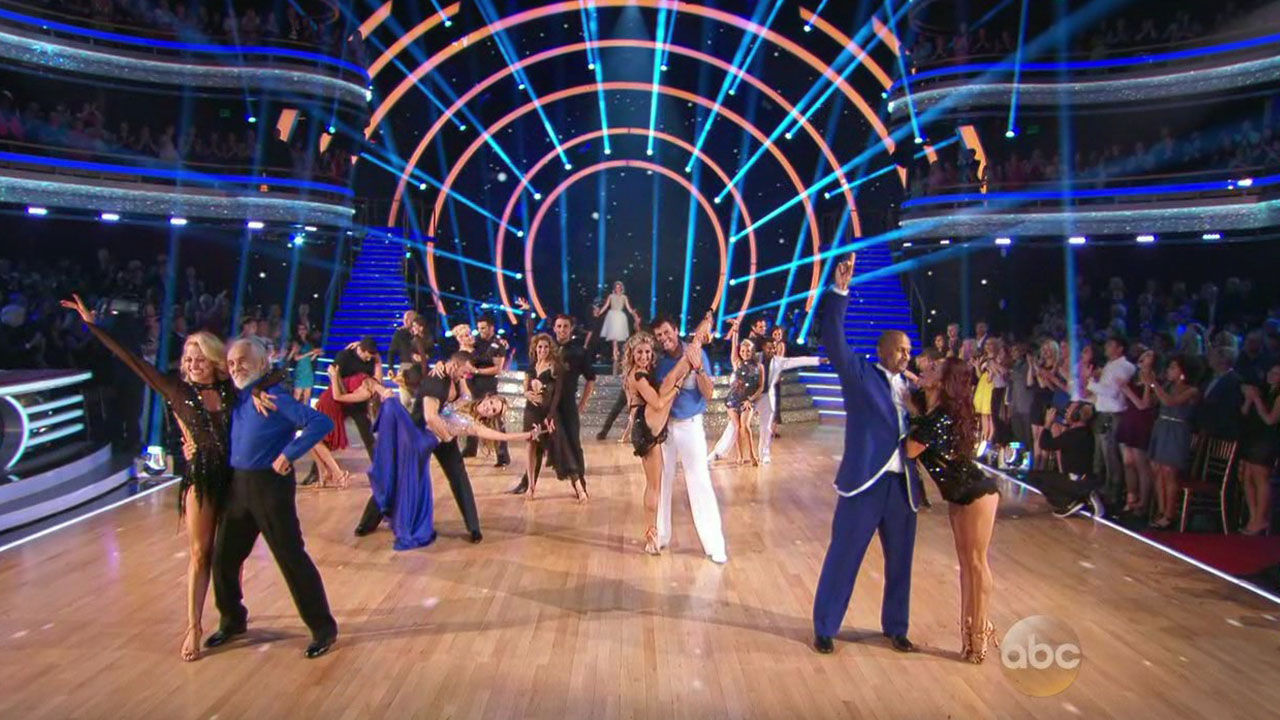 Here's a recap of the routines, from highest score to lowest:

LEA THOMPSON - 35 out of 40
Marty McFly's mom was really sad about landing "in jeopardy" last week. Maybe she doesn't know that "jeopardy" doesn't necessarily mean you're in the bottom of the pack? But it seems to have been a good thing because she was doubly motivated at rehearsal. Artem Chigvintsev is teaching her the jive, which Lea says does NOT come easily to her. Obviously this woman lives for challenges, because she nailed it. Head judge Len Goodman called the dance simply terrific, Julianne Hough called her a "hot mama leopard" (in reference to her costume, I'm hoping), and Bruno Tonioli compared her to Ann-Margret. Carrie Ann Inaba wins the excitement meter, though. She got so animated talking about the dance she fell out of her chair! 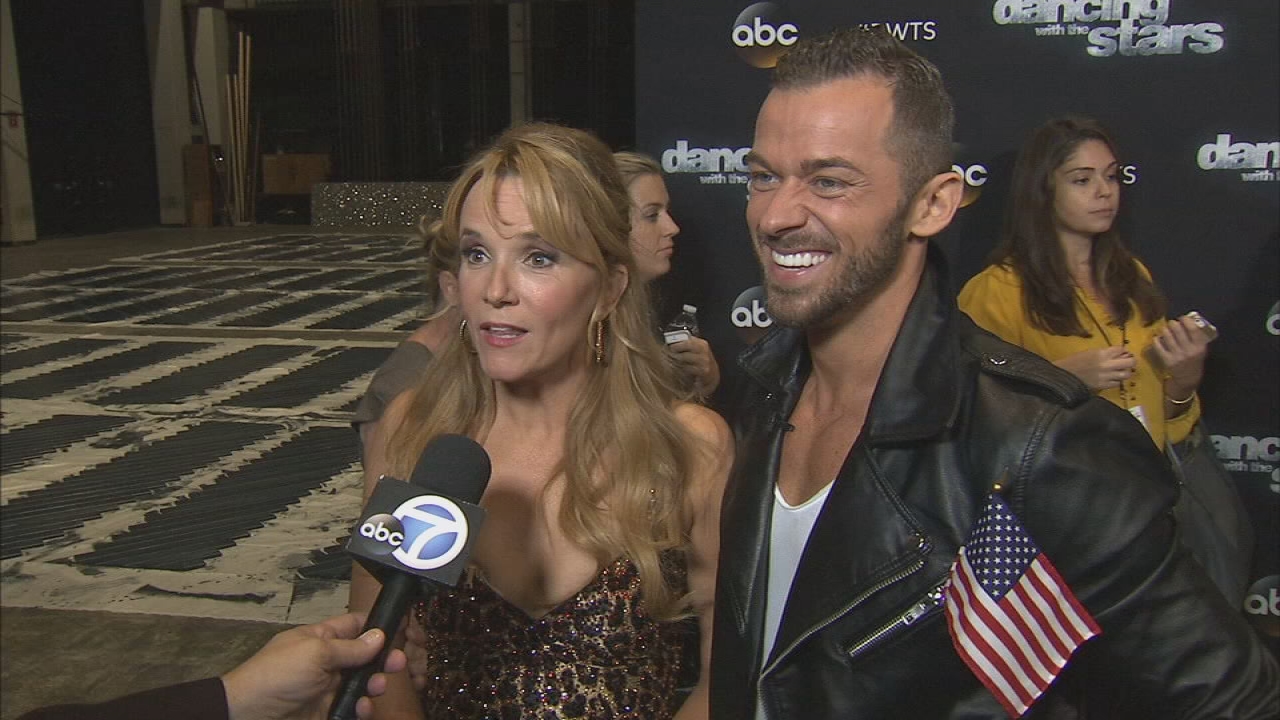 JANEL PARRISH - 34 out of 40
Like Lea, Janel was disappointed with last week's scores. Val Chmerkovskiy spent the week pushing her, not to be mean, but because he thinks she can do it. Her favorite song choice was the catchy pop tune "Call Me Maybe" and it's not one you would necessarily think would work with a Foxtrot. But this is Val, he can do anything. Julianne said the dance was not traditional but screw tradition, she loved it. Bruno called her "hot to trot," and Carrie Ann said the routine was close to perfect. 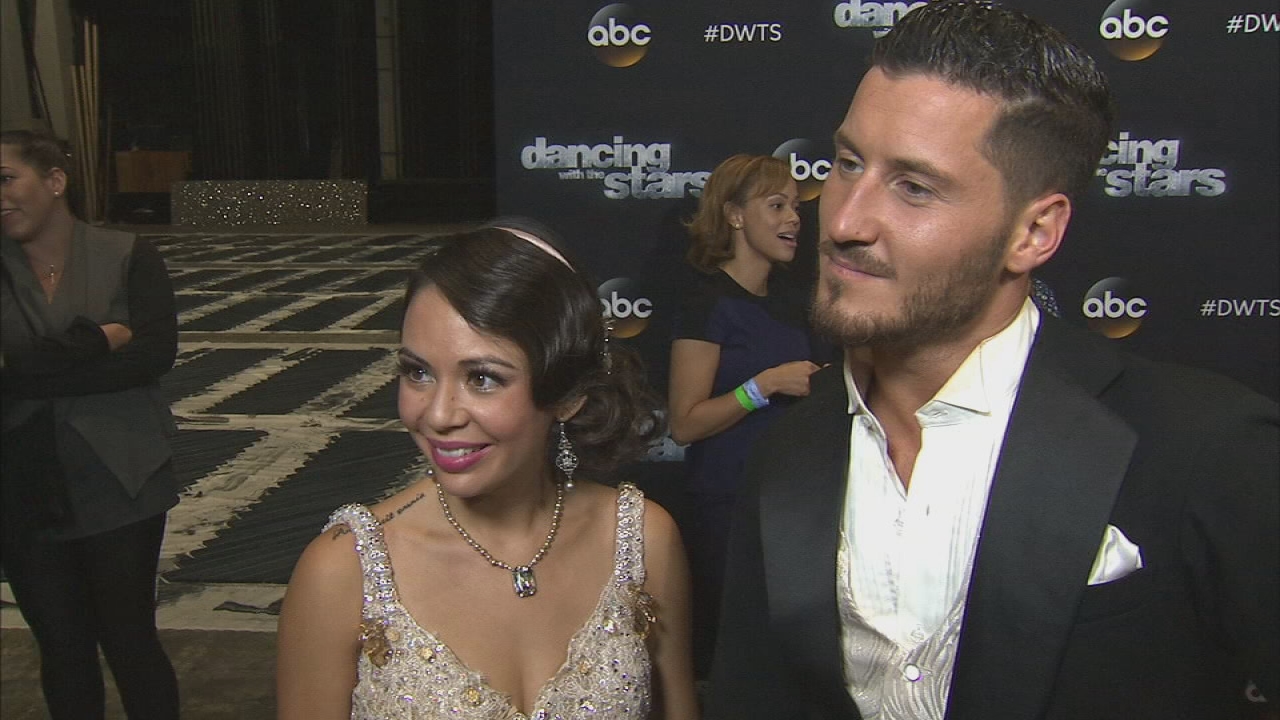 BETHANY MOTA - 33 out of 40
The dancing through the pain award goes to Beth for pulling off a tricky, inventive Derek Hough choreographed Foxtrot with a badly sprained ankle. Her favorite song is Meghan Trainor's "All About the Bass." Of course, in Derek's mind, that means she needs to dance ON a bass, very creative. Len called it the best number he'd seen of the night, and Carrie Anne praised her ability to tell a story through her dance. Afterwards, Beth told Erin Andrews she didn't realize climbing onto the bass would be difficult, she just did it! To which Erin answered, "Thanks for signing the waiver!" 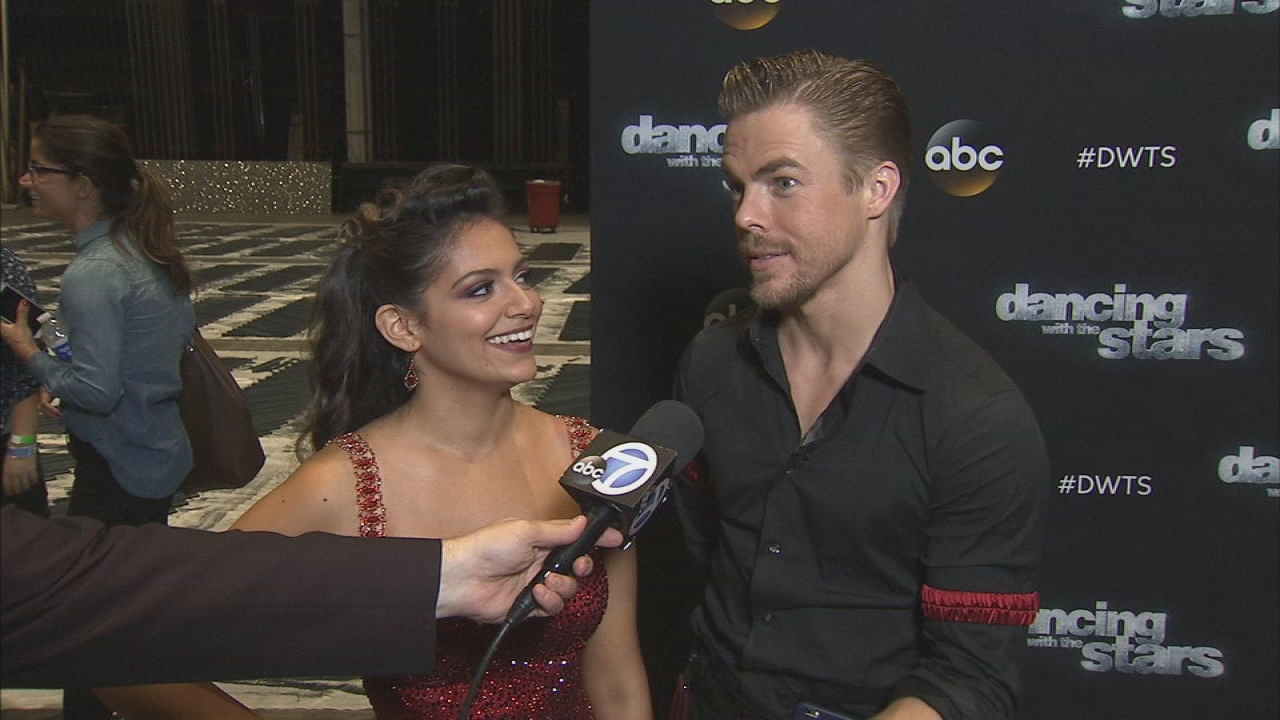 ALFONSO RIBEIRO - 32 out of 40
Week one's top dog was heavy into mind games with himself during rehearsal. Witney Carson hit the frustration wall as a teacher because of Alfonso's frustration with himself. It all finally connected, more or less, at show time. He paid homage to his "Fresh Prince" pal Will Smith by choosing "Getting' Jiggy Wit It" as his song. Kudos to Witney for being able to put a Samba to that hip-hop hit. Len told Alfonso he liked his "vim and vigor." Len also let us know he won't be judging next week but didn't tell us who'd be stepping in to take his place. 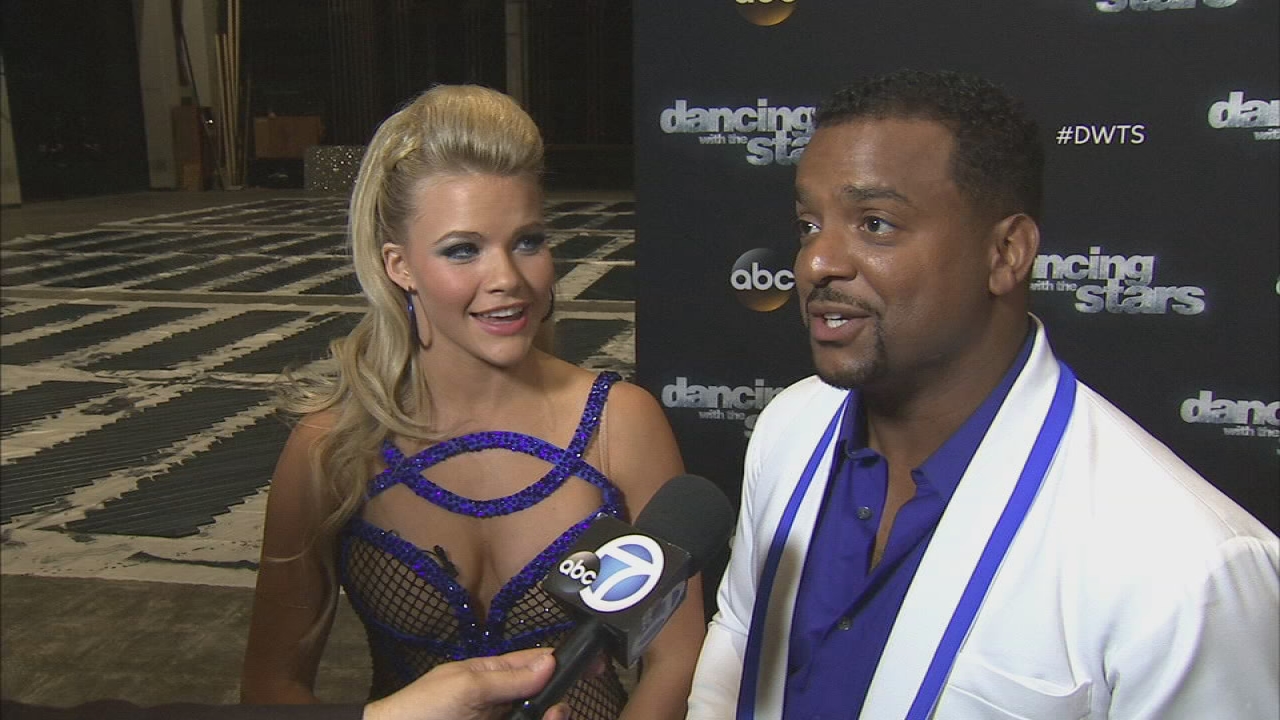 SADIE ROBERTSON - 31 out of 40
Another challenge for choreographer Mark Ballas because he had to make a jazz routine fit with a country song. After Sadie's "Duck Dynasty" dad checks out costumes via Skype (all rejected!), she shows up in Daisy Dukes and cowboy boots, perfect. Bruno, Julianne, and Carrie Ann all praised the dance but Len proved to be the stick in the mud and said the fusion just didn't "gel" for him. 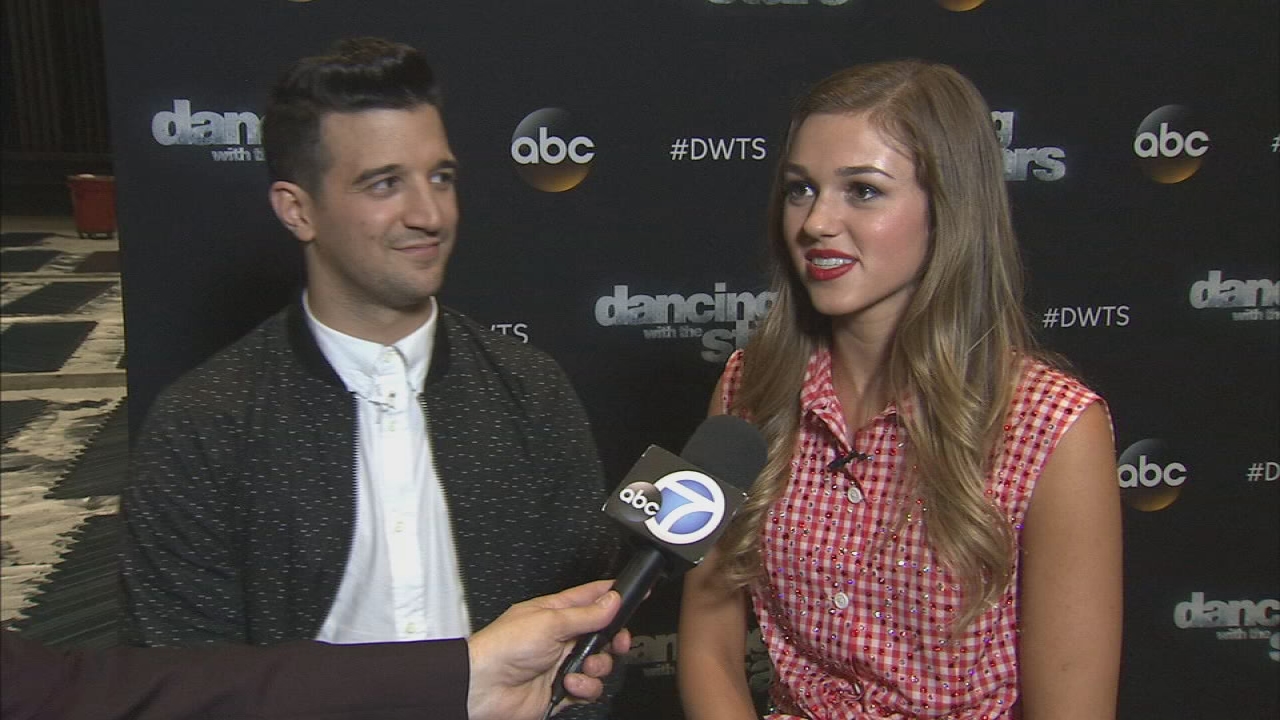 ANTONIO SABATO JR. - 31 out of 40
Cheryl Burke is a bit worried about the Rumba because it is a very intimate, passionate dance and she's only known Antonio for a couple of weeks. Antonio is worried because he has to find his inner larger-than-life personality. They didn't need to worry, and Len told him to stop over-analyzing the dances, just come out and have fun! He added the secret to the show is just getting better each week, and for that it was mission accomplished. Julianne said his dance was leaps and bounds better than week one. And leave it to Bruno, who told Antonio he had a nice butt and he should use it more. 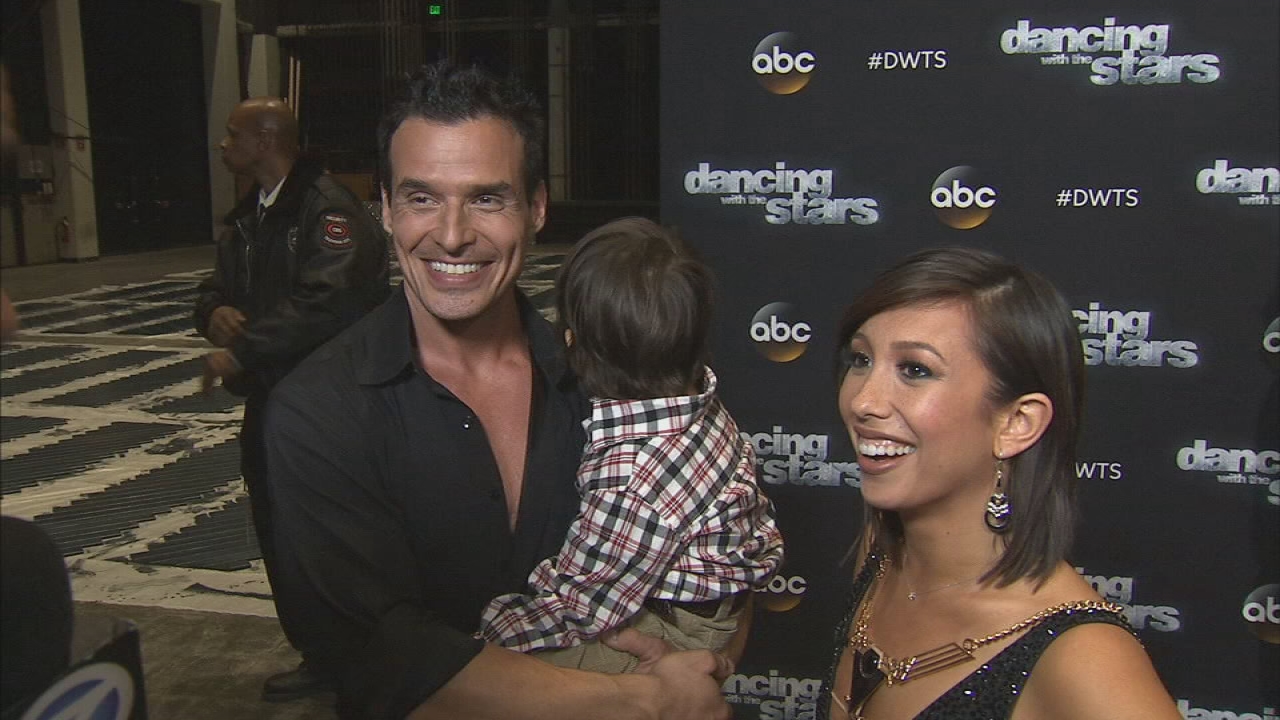 JONATHAN BENNETT - 30 out of 40
He and his newbie partner Allison Holker are still giddy about even being on the show and it's a little bit adorable. They are assigned the Cha Cha, and Allison tells her partner he needs to find his sexy side. Of course that embarrasses him. Again, adorable. And the dance was fast and fun but according to Len and Carrie Ann, not really a Cha Cha. They all want more content! Jonathan told Erin after the dance that since neither of them has been on the show they often guess what's expected or acceptable. Oops. 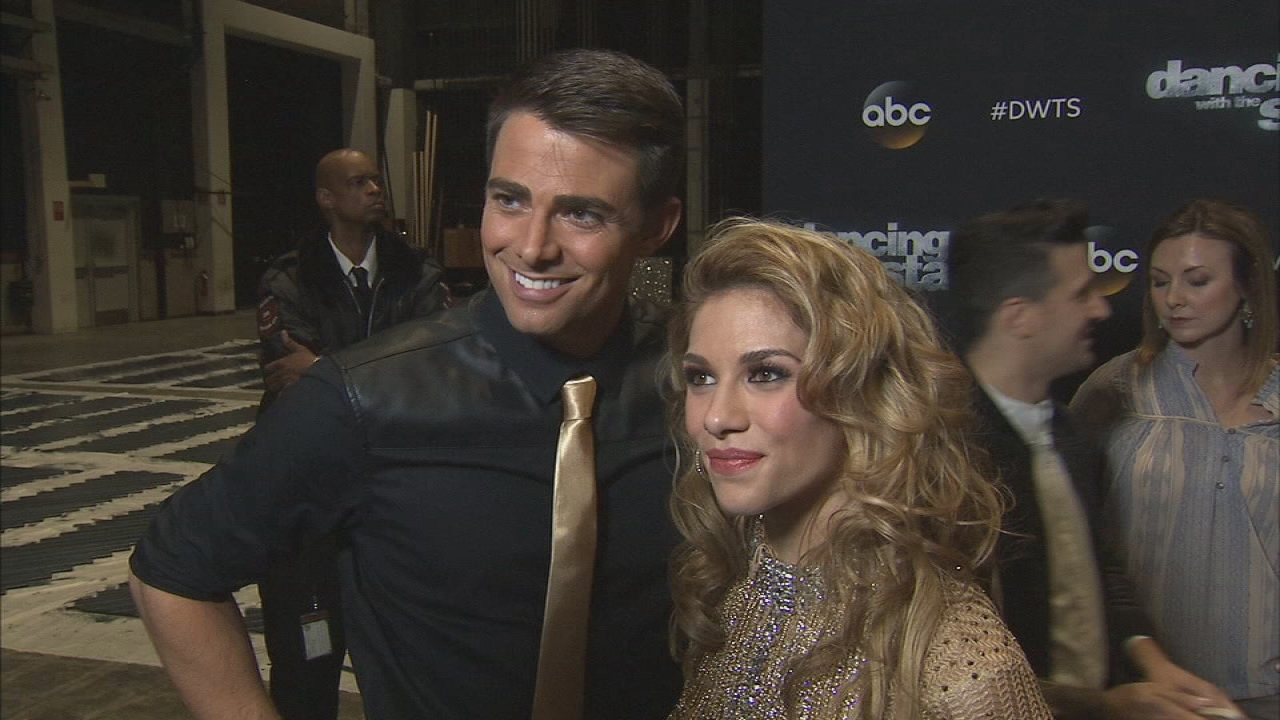 TOMMY CHONG - 28 out of 40
Tommy's still got that surprise factor. When Peta Murgatroyd tells him they'll be learning the Salsa, he says he actually knows the dance a little from his younger days. Apparently, it was a good way to meet girls. Peta tells us her goal is to get some more technique in the routine, she can't simply rely on his personality. (Yeah, I think she can!) Julianne had to have been saving up this one for the right time. She said she would need to use all "F" words: fun, fast, funny, fabulous and fearless. Bruno called him an inspiration, and reminded us all that age is a stage of mind. After the dance, Erin asked Tommy how young he feels and the 76-year-old said "72." Timing. And then after the scores were revealed, Erin asked if there was anything he wanted to say to the fans. Tommy: "Please vote for us because if you do we will save the world." The man knows funny. 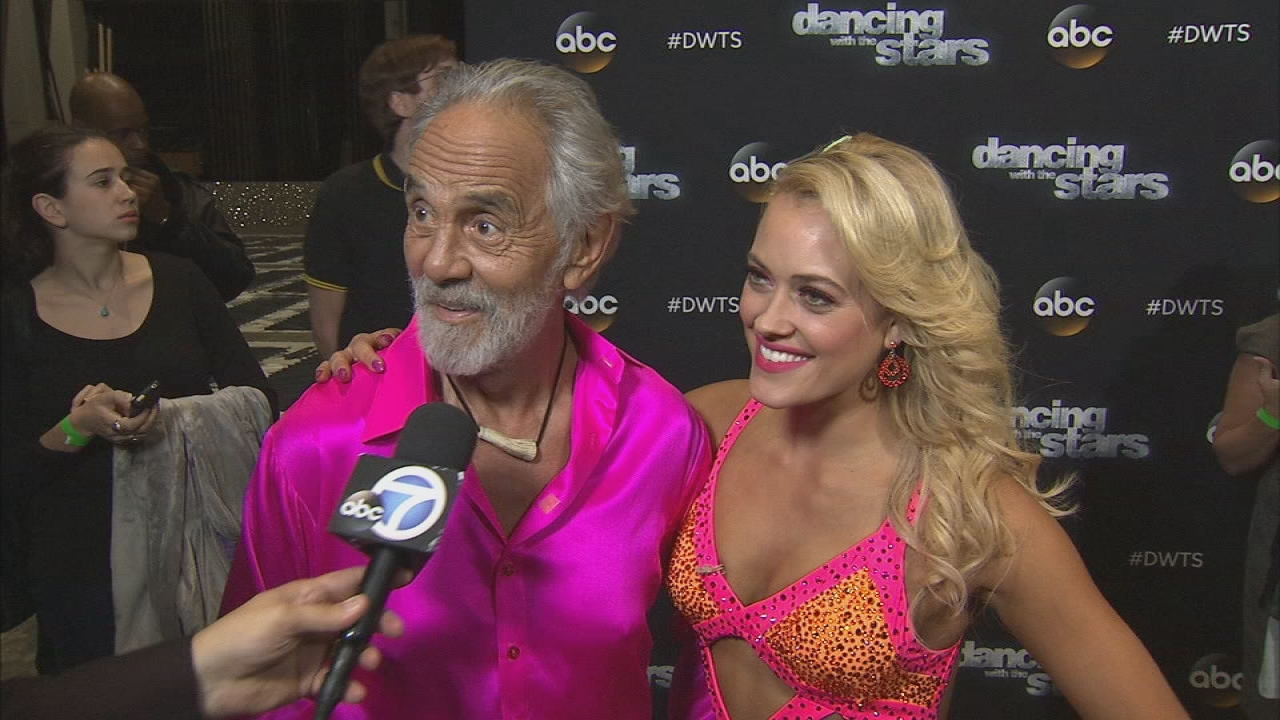 BETSEY JOHNSON- 28 out of 40
At least, they told us it was Betsey Johnson. The colorful fashion designer was almost unrecognizable after her "DWTS" make "under." The segment started with her professing embarrassment for the first week; coach of the year, Tony Dovolani, gives us the perfect pep talk. It helps that her dance is the elegant Foxtrot, she's channeling Ginger Rogers and Cyd Charisse. Carrie Ann was dumbfounded, and applauded the transformation. Len told her she'd never looked better. Julianne called her elegant and timeless, and Bruno said "Norma Desmond, are you ready for your close up?" 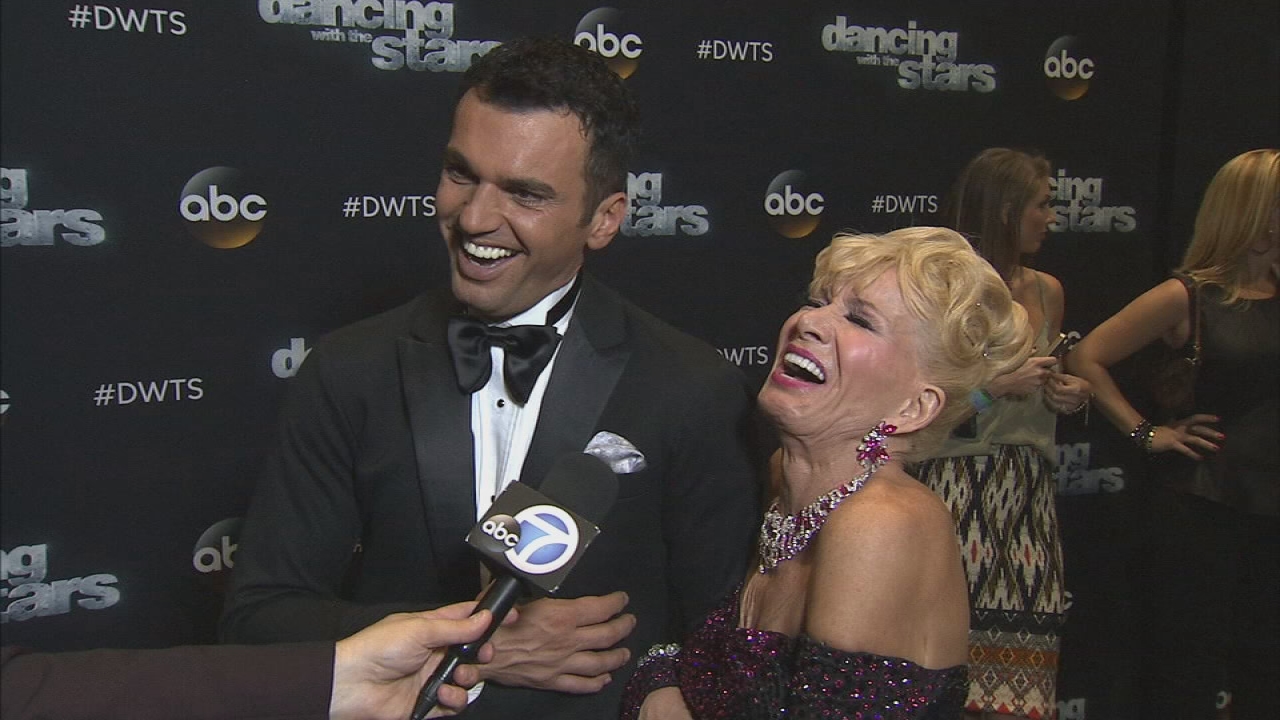 RANDY COUTURE - 28 out of 40
Randy had the misfortune of dancing first. He and Karina Smirnoff danced a really nice Cha Cha but that first score is always a little low. Len said the dance put him in a good mood, Julianne called it a great way to start the night, and Bruno praised his energy and enthusiasm. Carrie Ann was the wet blanket, saying the routine was underwhelming. 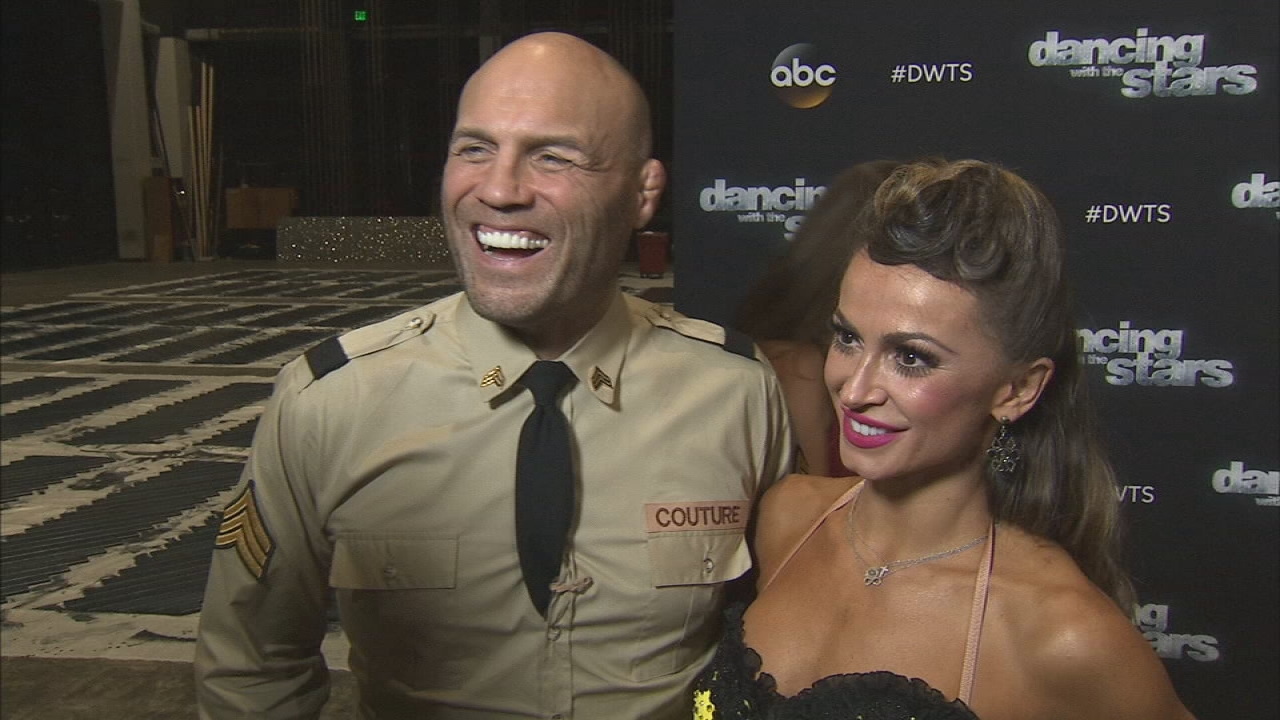 TAVIS SMILEY - 28 out of 40
Tavis had one of those crazy "real life" weeks we see on "DWTS." He was traveling with a book tour and he and Sharna Burgess had a tough time fitting in rehearsals. We see him having a little outburst and asking her to dumb down the routine because it was too hard and he only saw a meltdown in his future. No telling if she changed it or not, but it was not a very difficult Cha Cha routine. The judges were sympathetic to his schedule but let him know the lack of rehearsal showed in the final product. Great song, though, with "Boogie Wonderland" from Earth, Wind & Fire! 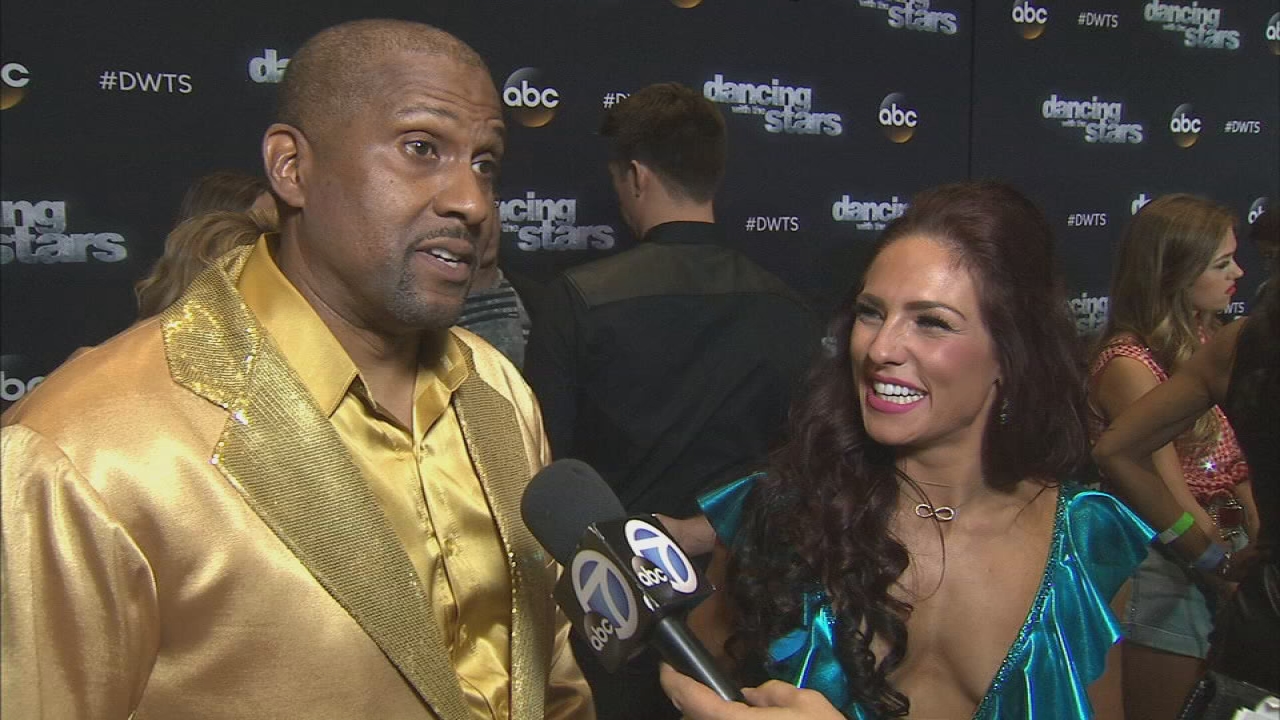 MICHAEL WALTRIP - 24 out of 40
Our race car maven certainly has the lovable factor in his favor. You like him. You want him to do well (just like his good pal Bill Engvall last year). But while the fun factor is there, the dance skill is not. Carrie Ann loves the joy he brings, but didn't see much Samba in his Samba. And Len told Michael he put the "sin" in "syncopation." 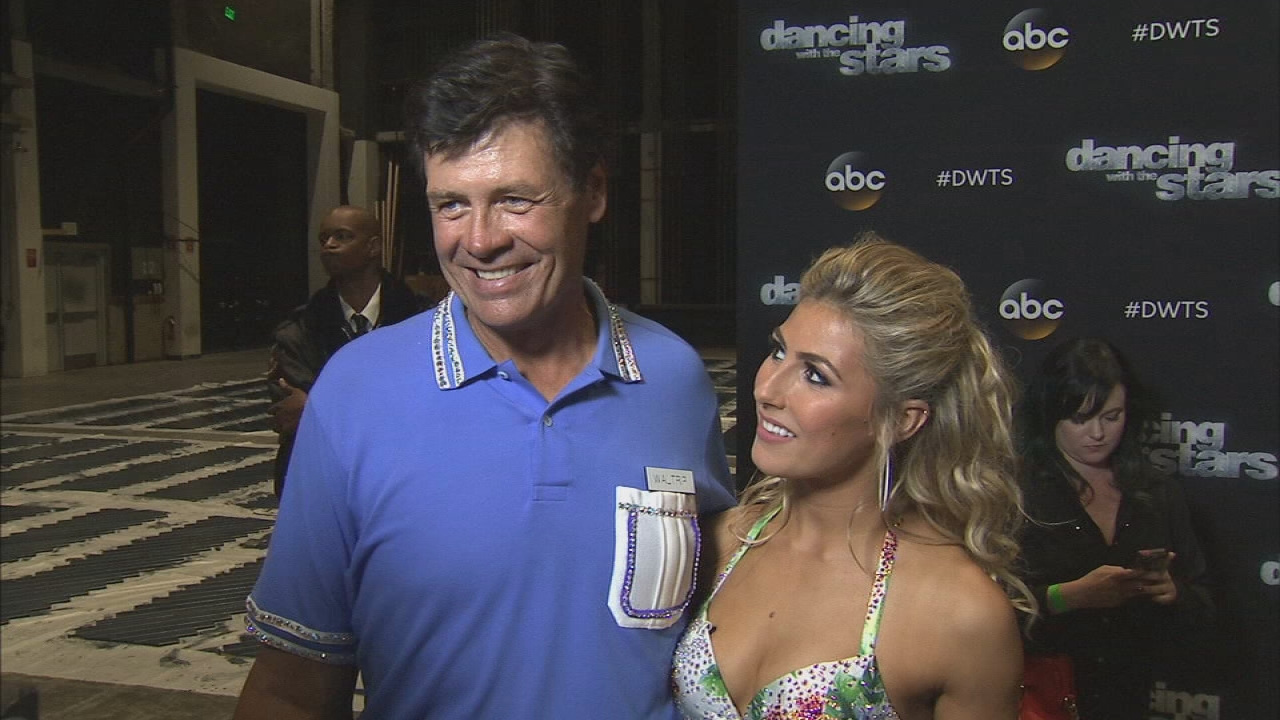