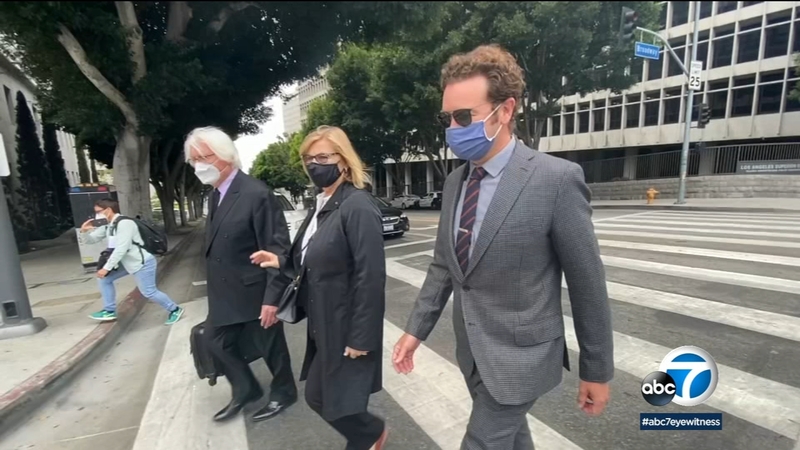 LOS ANGELES (KABC) -- Eyewitness News has obtained courtroom exhibits from the May preliminary hearing of actor and Scientologist Danny Masterson, who is charged with three counts of felony rape. Masterson has pleaded not guilty and maintains that all of the sex was consensual, but the judge found there is sufficient evidence for the case to proceed to trial.

The preliminary hearing stretched over four days with testimony from three women who say they were raped by Masterson between 2001 and 2003. And while it's Masterson facing criminal charges, much of the testimony focused on his religion - Scientology.

All three of the women were Scientologists at the time of the alleged rapes, but have since left the religion. All three women also told similar stories of how church officials allegedly tried to stop them from reporting Masterson to law enforcement, a claim that Scientology denies.

The testimony was rife with details of the alleged rapes and claims about the inner workings of Scientology. And while Masterson defense attorney Tom Mesereau tried to keep out any discussion of Scientology, Judge Charlaine Olmedo denied that request noting that the defense had just filed a brief that referred to the church dozens of times.

"I counted 88 times that you used the words Scientology, Church of Scientology, cult, anti-Scientology, anti-Scientologist and religion," said Judge Olmedo at the start of the preliminary hearing. "I find it interesting that after using those terms 88 times in a 29-page brief, you then say it has absolutely nothing to do with the case."

After four days of testimony that included lengthy discussions of Scientology doctrine, Judge Olmedo concluded that church policy "not only discourages but prohibits one Scientologist from reporting another Scientologist in good standing to outside law enforcement."

"This expressly written doctrine sufficiently explains to this court the hesitancy and lateness in reporting the crimes charged to law enforcement," Judge Olmedo went on to say.

In a statement, a Scientology spokesperson told Eyewitness News in part that "it is an outrageous and bigoted falsehood that Scientology forbids the reporting of criminal conduct by Scientologists - or by anyone - to law enforcement. The assertion that there is such a policy is contrary to actual Church policy which explicitly demands Scientologists abide by all laws of the land."

The exhibits obtained by Eyewitness News include excerpts of recorded interviews two of the women did with the LAPD and District Attorney's Office back in 2017.

Chrissie B: "He hit me."
Deputy District Attorney Reinhold Mueller: "Where?"
Chrissie B: "When I pulled his hair to really get him off, because he was putting himself inside of me. And I really did not want to that night, and I was just fed up."

Chrissie B, who had given Eyewitness News permission to use her first name, last initial and photos of her, testified that she woke up one morning in 2001 to find her then boyfriend Danny Masterson raping her inside their bedroom at their Hollywood Hills home.

Chrissie B: "He just always got angry, he would get angry. He felt like because he supported me that he was - it was like I was a possession. He should be able to have sex whenever he wants."

Chrissie B testified that Masterson hit her, spit on her and called her white trash. She said that she reported the rape to Scientology back in 2001, but says she was put on an "ethics program" and told by a Scientology executive at the Celebrity Centre that she had "pulled in" or caused the alleged rape.

"Reporting other Scientologists in good standing to law enforcement is a high crime," Chrissie B testified. "If I reported him, I would stop him from being a Scientologist, from going up the Bridge to Eternal Freedom."

The alleged victim identified as "Jane Doe 2" says she went to Masterson's Hollywood Hills home in 2003 expecting to chat and maybe flirt. She testified that he gave her a glass of wine and that her memory started to get blurry as events unfolded.

She referred to Scientology's "Tone Scale" to explain why she obeyed some of Masterson's "drill-sergeant" like commands."

In her 2017 interview with the LAPD and DA's office, she said:

The alleged rape, she testified, left her ravaged and limp like a rag doll.

No one has followed the case more closely than journalist Tony Ortega, who first broke the news back in 2017 that the LAPD was investigating Masterson for the alleged rapes.

"You have four days of victims testifying about how it's the Church of Scientology that revictimized them and made them try to accept that they were at fault for being raped," Ortega tells Eyewitness News.

"You have the prosecution reading from Scientology policies and Scientology books. I mean what a nightmare for the Church of Scientology."

Each of the women testified that they feared reporting the alleged rapes because they believed the church would declare them to be a suppressive person, something the church says is "extremely rare" and only "occurs in instances of serious offenses against the Scientology faith."

"And so, the thing that the Church holds over you is that if you run afoul of the organization in one way or another, they will declare you a suppressive person," says Ortega. "That's Scientology jargon, it essentially means excommunication."

A Scientology spokesperson tells Eyewitness News that "the women in question have not been declared 'suppressive persons.'"

Celebrities, like Danny Masterson, have long played a high-profile role in Scientology. All three women testified that they believed Masterson's celebrity status in the church meant that he was more important - and they were less likely to be believed.

"So, that's what makes it so difficult for these women to come forward is they feel that there's this whole organization against them, that Danny, is this important celebrity and so they're going to protect him," says Ortega.

One celebrity and former Scientologist in the women's corner is actress and now outspoken Church critic Leah Remini. She interviewed Chrissie B on the series finale of her show "Scientology and the Aftermath."

"We hope and we pray that justice will be served," Remini said on the show in 2019.

In court documents, defense attorney Tom Mesereau argued that Remini's involvement is problematic. The document states that Remini accompanied at least some of the women on their interviews with police. Mesereau refers to the prosecution as "star struck" and claims that Remini cultivated law enforcement prejudice against Scientology.

"Leah is not a witness in the case," says Ortega. "She has no role in it, but I think you will see Masterson's side, you know, try to bring her into court to raise that thought for the jury that maybe it's all being put up by Leah. I just think they'll find that's a dead end."

Masterson's trial on the three rape charges is tentatively set for November. One big question looming - could Scientology leader David Miscavige be called to testify?

"Who better to ask about Scientology's policies about law enforcement than David Miscavige," says Ortega. "But they would fight tooth and nail to keep him out."