'Machete' to the rescue: Actor Danny Trejo helps save child trapped in overturned car in Sylmar 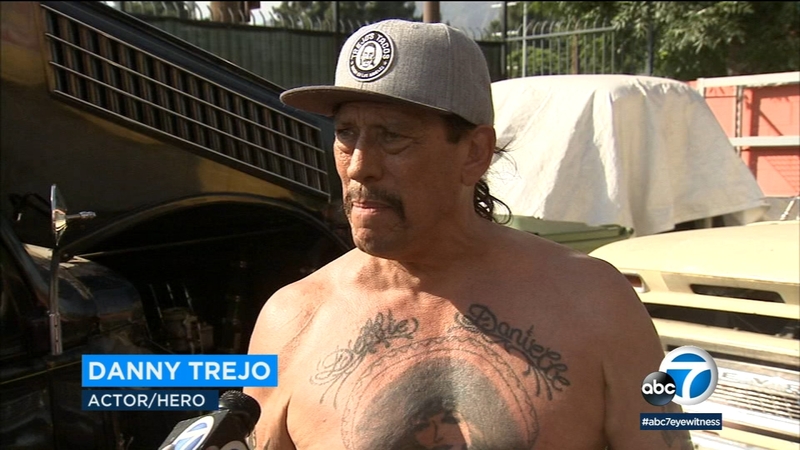 SYLMAR, LOS ANGELES (KABC) -- Well known for playing villains, actor Danny Trejo got the chance to be a real-life hero on Wednesday when he helped rescue a young special-needs child trapped in an overturned car in Sylmar.

Trejo happened to be in the area when two cars collided Wednesday afternoon in the area of Hubbard Street and Jackman Avenue.

One of the vehicles overturned onto its roof and a young child was trapped inside, strapped into a car seat.

Trejo and another bystander helped rescue the child.

Actor Danny Trejo discusses his rescue of a young special-needs child who was trapped in an overturned car in Sylmar.

Trejo crawled into the overturned wreckage from one side, he recalled, but he couldn't unbuckle the child's car seat from that angle.

The other bystander, a young woman, crawled in from the other side of the overturned vehicle and was able to undo the buckle. Trejo was then able to get the baby out of the car seat and pulled safely from the wreckage.

While that was happening, the boy's grandmother remained trapped in the driver's seat. Firefighters had to use equipment to free her.

Trejo says while the firefighters were working to free the woman, he was trying to distract the boy from the scene.

He said he works with special-needs children so he knew how to keep the little boy calm.

"He was panicked. I said OK, we have to use our superpowers. So he screamed 'superpowers' and we started yelling 'superpowers," Trejo said. "I said do this, with the muscles. He said 'muscles.'"

"We got kind of a bond. I kept facing him away from the accident."

The Los Angeles Fire Department said three people were transported to a hospital, but there were no life-threatening injuries.

The cause of the accident remains under investigation. But Trejo said it appeared to him that the other driver ran a red light, smashing into the vehicle that held the young boy and his grandmother.

He had some advice for other motorists and parents:

"And the only thing that saved that little kid was his car seat, honest to God."

The 75-year-old Trejo, who grew up in Los Angeles and lives in the San Fernando Valley, has made a career of playing tough guys and villains. He's perhaps most identified with the character Machete from several Robert Rodriguez films.

In recent years, he's also branched out to the food business, with a taco restaurant and a Hollywood doughnut shop.

"Everything good that has happened to me has happened as a direct result of helping someone else. Everything," he told Eyewitness News.