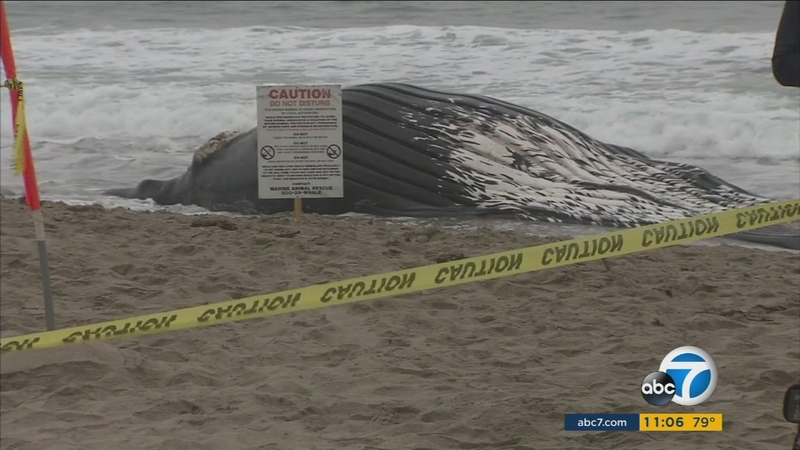 Friday morning, marine experts took tissue samples of the whale to run tests to figure out what killed it. Marine Animal Rescue officials said they believed the whale may have experienced some trauma, but they weren't sure.

Lifeguard officials estimate the whale was between 10 and 20 years old. The lifespan for a humpback whale can be 45 to 100 years old.

The carcass was roped off, and officials are asking people to keep their distance.

The dead whale could cause trouble for beachgoers this Fourth of July weekend. Dockweiler State Beach is a popular spots for campers.

"Unfortunately, it's here on Fourth of July weekend, when people want to come to the beach. We ask that the people not come near the water here because you see the fluids are seeping out of it now, and those fluids pose a hazard, and you can already start to smell the stench from it, and this is only less than 24 hours," said Capt. Kenichi Haskett of the Los Angeles County Lifeguards.

Lifeguard officials said they were working on a plane to use heavy equipment and boats to tow the whale out to sea at high tide Friday night and let it naturally decay in the ocean.

According to authorities, is not the same whale that was entangled in fishing line in Dana Point.

A dead humpback whale is seen on the shore of Dockweiler State Beach on Thursday, June 30, 2016.