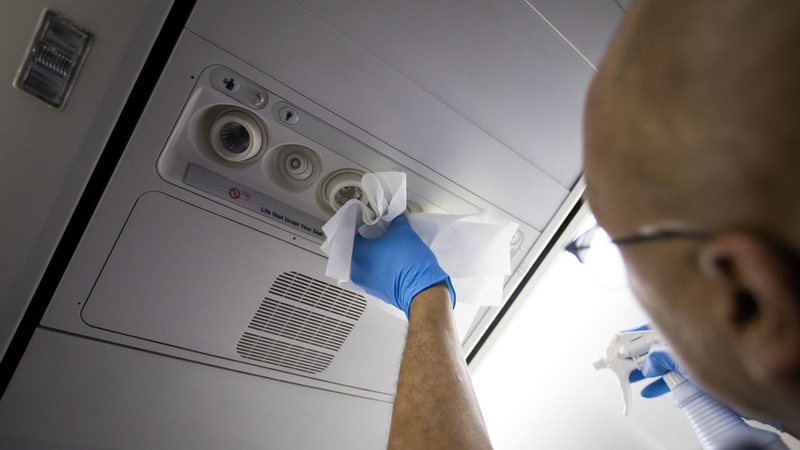 How airlines are cleaning planes in response to coronavirus outbreak

LOS ANGELES -- Airlines have responded to the spread of the new coronavirus by stepping up their aircraft cleaning and sanitation procedures. Here's a look at information released by several major American carriers about their response to the COVID-19 outbreak:

In addition to regular cleaning procedures, Alaska has deployed extra sanitization measures for flights that remain on the ground for more than an hour at a hub.

"We're focusing more attention on the areas of the cabin which are touched most frequently such as armrests, seat belts, tray tables, overhead controls including air vents, light buttons, call buttons and exterior and interior door handles to lavatories," Celley Buchanan, the airline's director of operations support services, wrote in a blog post.

The Seattle-based airline has also made temporary changes to inflight service like not refilling reusable cups and suspending towel service and onboard recycling. In the terminal, Alaska has temporarily stopped using fingerprint scanners.

American has beefed up cleaning procedures for aircraft that remain at an airport overnight, which the airline says is "the majority of our aircraft each day." That process includes "a more thorough cleaning of all hard surfaces, including tray tables and armrests," the airline said in a statement on its website.

Cabin crew have been provided with hand sanitizer and cleaning wipes on international flights across the Pacific and to and from Italy, the airline added.

In a statement on its website, Delta said it uses an "an EPA-registered disinfectant" to clean all of its aircraft. The Atlanta-based airline added that it fogs all trans-Pacific flights that arrive in the United States and is working to obtain the necessary equipment to expand fogging to trans-Atlantic flights from areas with COVID-19 cases.

In addition to implementing enhanced cleaning of its fleet of aircraft, Frontier is distributing hand sanitizer at its gates and ticket counters.

JetBlue said it has enhanced aircraft and terminal cleaning procedures and is working to promote hand-washing and other hygiene best practices among employees. The airline is working to provide customers with disinfecting wipes and has temporarily suspended hot towel service, according to its website.

Dallas-based Southwest has enhanced the overnight cleaning process for all of its aircraft, which it said often undergo more than six labor hours of cleaning daily. Southwest said it is expanding the use of an "EPA-approved, hospital-grade disinfectant" to clean common touchpoints in the cabin, lavatory and flight deck of its aircraft.

Spirit said on its website it uses EPA-approved disinfectants and has trained crewmembers to identify and report signs of infectious diseases.

United's cleaning procedures include a "thorough wipe-down of all hard surfaces touched by customers and employees - including lavatories, galleys, tray tables, window shades and armrest." United plans to soon use electrostatic foggers to disinfect the air and cabin surfaces on all inbound international flights landing at a United hub or select other airports.

The airline added: "When we are advised by the CDC of an employee or customer who has traveled on board and who is potentially exhibiting coronavirus symptoms, that aircraft is taken out of service and sent through a full decontamination process that includes our standard cleaning procedures plus washing ceilings and overhead bins and scrubbing the interior."