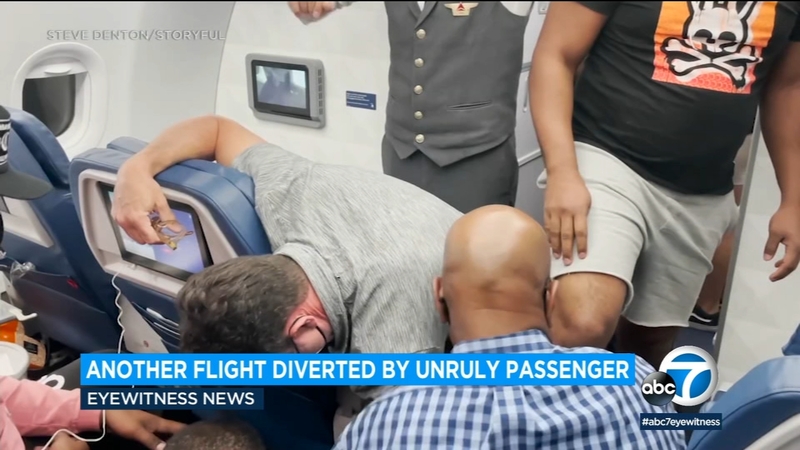 LOS ANGELES (KABC) -- An unruly passenger is in custody after another violent disruption onboard a Delta flight, this time involving an off-duty airline employee who made threats and attacked two flight attendants on a plane traveling from Los Angeles Friday.

The plane was headed to Atlanta around 5:45 p.m. when Oklahoma City police say the suspect, identified as 34-year-old Stephon Jamar Duncan, made "terroristic threats" to "take down the plane."

Authorities say he also attacked two flight attendants before several other passengers -- including an off-duty pilot -- and the flight crew were able to subdue him.

Video shows multiple man on top of Duncan, who can be heard screaming while lying on the cabin floor. At one point in the video, the captain can be heard over the speaker asking for "strong men" to the front of the plane to help restrain the man.

The plane made an emergency landing in Oklahoma and was allowed to resume travel to Atlanta after being cleared by police. No passengers were injured in the incident.

Duncan, who officials say was exhibiting signs of mental health issues, was taken to a hospital after complaining of chest pain.

Officials say the FBI is questioning Duncan, who is expected to be charged with two counts of assault and battery.

A passenger who was on the flight gave his account of what he heard.

"I was unaware of this, I was in the back of the plane. A long two minutes after that first announcement, the pilot made an announcement and said 'all able-bodied men, please come to the floor, there's an emergency, come to the front,'" he said. "I got about halfway up before we were told to go back to our seats, the situation was under control."

This is the third such incident on a Delta flight out of LAX in the past two weeks.

Last week, a flight from L.A. to Detroit was diverted when a passenger became a threat.

Earlier in the week, a passenger on a Delta flight out of L.A. was arrested after he allegedly attempted to break into the plane's cockpit mid-flight.

Delta released the following statement after the incident Friday:

Thanks to the crew and passengers of Delta Flight 1730 (LAX to ATL) who assisted in detaining an unruly passenger as the flight diverted to Oklahoma City (OKC). The aircraft landed without incident and the passenger was removed by law enforcement. We apologize to our customers for the delay and any additional inconvenience this caused.

It was a tense situation on a flight from JFK Airport in New York to San Francisco International Airport after an unruly passenger refused to wear a mask, began snorting a "white substance," and then was accused of touching at least one female passenger.