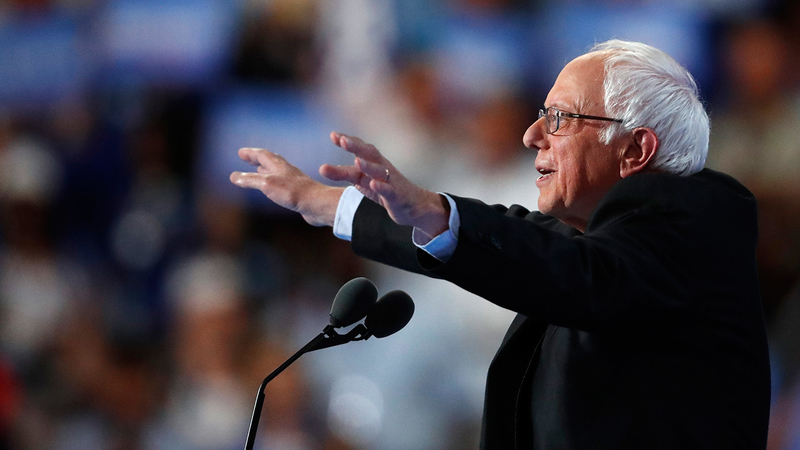 Bernie's 3 minutes of applause before speech

PHILADELPHIA -- Ending months of animosity, Bernie Sanders robustly embraced his former rival Hillary Clinton Monday night as a champion for the same economic causes that enlivened his supporters, signaling it was time for them, too, to rally behind the Democratic nominee in the campaign against Republican Donald Trump.

"Any objective observer will conclude that - based on her ideas and her leadership - Hillary Clinton must become the next president of the United States," he declared in a headlining address on the opening night of the Democratic convention.

President Bill Clinton, watching from the audience, leapt to his feet and applauded, as did most of the delegates filling the convention arena.

** Click on the video player above to watch Sanders' full speech **

While Sanders had endorsed Clinton previously, his remarks Monday marked his most vigorous and detailed praise of her qualifications for the presidency. It came at a crucial moment for Clinton's campaign, on the heels of leaked emails suggesting the party had favored the former secretary of state through the primaries despite a vow of neutrality.

PHOTOS: The 2016 DNC in Philadelphia


Sanders scored the resignation of party chair Debbie Wasserman Schultz, a nemesis in the primaries, but that wasn't enough to quell the anger of supporters. As the convention opened, they still erupted in chants of "Bernie" and booed Clinton the first several times her name was mentioned. Outside the convention hall, several hundred marched down Philadelphia's sweltering streets with signs carrying messages such as "Never Hillary."

One of the most talked about moments on Facebook was simply Sanders' welcome as he walked on stage to deliver his speech. The audience cheered for more than 3 minutes. Watch it here:
EMBED More News Videos

Watch the more than 3 minutes of applause Sen. Bernie Sanders received when he first walked out on the stage at the DNC.

By the time Sanders took the stage for the night's closing address, much of the anger had been overshadowed by speeches promoting party unity. Sanders did his part, imploring his supporters to consider a country under Trump's leadership.
"If you don't believe this election is important, if you think you can sit it out, take a moment to think about the Supreme Court justices that Donald Trump would nominate and what that would mean to civil liberties, equal rights and the future of our country," he said.

Sanders spoke just after Massachusetts. Sen. Elizabeth Warren, a favorite of liberals who has emerged as one of the Democrats' toughest critics of Trump.

"Donald Trump has no real plans for jobs, for college kids, for seniors," she said in the keynote address. "No plans to make anything great for anyone except rich guys like Donald Trump."

Following his speech, Sanders countered an accusation from Trump of selling out with a simple statement, "Never tweet."