Democrats target suburban voters in key battlegrounds ahead of 2020 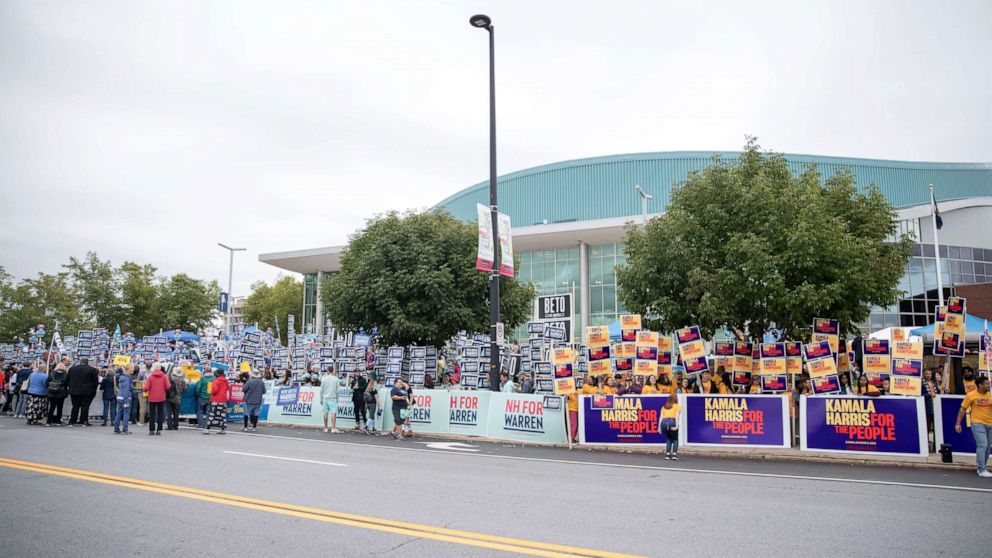 ABCNews
By KENDALL KARSON
Democrats say they are mounting a major push across battleground states to court suburban voters -- a key voting demographic that was once the bedrock of the GOP but has been shifting away from the party in the era of President Donald Trump.

The effort, which will target areas that will likely define the 2020 presidential contest, kicks off on Thursday with a roundtable event, hosted by Democratic National Committee Chair Tom Perez, alongside local Texas residents in the suburbs of Harris County.

The site of this first event sits in the 7th Congressional District currently held by freshman Rep. Lizzie Pannill Fletcher -- whose seat was a key pickup in a crucial geographic area seen by Democrats as the epicenter of their successes in 2018 and now representative of their targets in 2020.

The event coincides with the third Democratic debate, hosted by ABC News and Univision, in Houston, Texas on Thursday night at 8 p.m.

During Thursday's event, Perez is expected to underscore Trump's "weaknesses" with this core voting bloc and the foundational issues of the 2020 race, including gun safety, immigration, health care and the economy. A new ABC News/Washington Post poll found that among the issues central to the gun reform debate, background checks and red flag laws are two policies that boast overwhelming support across the country.

"Suburban voters sharply rejected Republicans in 2018 and they're ready to hold Trump accountable in 2020," said David Bergstein, DNC Director of Battleground State Communications. "They're fed up with his toxic health care agenda, failure to support commonsense gun safety measures and endless string of broken promises on a number of issues."

"Across the battlegrounds, Democrats are already working to mobilize and organize these crucial neighborhoods and ensure our eventual nominee has the infrastructure they need to win in 2020," he added.

Exit poll analysis following the 2018 midterms completed by Langer Associates for ABC News shows that the suburban voters comprised half of the American electorate. While Democrats won over urban residents and Republicans won over small cities -- the suburbs were split evenly, 49-49%.

Political experts see Republicans' unraveling grip on the suburbs in part due to Trump's abrasive style and divisive rhetoric - whether in person or on Twitter - driving away independents and suburban voters, particularly women.

"The suburban vote has been trending away from Republicans for years now," Leah Askarinam, an analyst at Inside Elections, told ABC News. "This is not a new phenomenon that started in 2016 but it did accelerate in 2016, when Trump was on the ballot."

"The theory is that former Republicans in the suburbs were content with Republican policies on the economy, maybe even immigration to an extent," she continued. "But some of the rhetoric that the president uses and some of the policies that Republicans have embraced, are maybe not in line with the Republican Party of George Bush."

Following voters' split judgment on the Trump presidency in 2018 -- rebuking his agenda by enabling Democrats to regain control of the House, yet keeping the Senate within Republican hands -- both parties are navigating on different terrain in 2020.

But for Trump and Republicans, headwinds emerged with suburban women during the midterms: in a March 2018 NBC News/Wall Street Journal poll, Trump's approval among that group sunk to 36% with disapproval standing at 61%.

Trump is blamed for accelerating the trend because after two years of his presidency, Democrats executed an offensive strategy in the suburbs to win back the House majority, and Askarinam notes, "it actually ended up proving to be a pretty successful strategy."

"Most of the gains Democrats made in 2018 were in suburban districts," she added.

At the center of Democrats' effort to woo the suburban vote in 2020 is Texas -- a state that is becoming increasingly in play in part due to changing demographics within its borders, including what FiveThirtyEight calls population growth "in and around the state's cities."

Former Texas Congressman Beto O'Rourke's competitive showing in last year's Senate race -- the closest outcome the Lone Star state has seen in recent decades -- suggested that Texas could be a key battleground in 2020.

Then there is the Trump factor.

Perez's event to preview Democrats' messaging campaign, as the party hopes to grow their margins with suburban voters, will be alongside local events in Wisconsin and Ohio, among other battlegrounds, that will also seek to highlight Democratic inroads with suburban voters.

On Wednesday, Assemblywoman Robyn Vining, who captured a traditionally Republican suburban district in Wisconsin, is set to hold a kitchen table roundtable with four mothers on Trump's record of "broken promises" including on health care and gun safety.

The event is set in suburban Waukesha county, a deeply red slice of the state that voted for Trump by nearly 30 points in 2016. Democrats argue that the county's waning support for former Republican Gov. Scott Walker signals a broader trend that the once Republican stronghold isn't so strong.

"In his previous three elections, Walker had been able to count on big turnout in three suburban Milwaukee Counties - Washington, Waukesha and Ozaukee - to offset Dane's numbers," Wisconsin Public Radio reported in November 2018. "Walker carried roughly 72 percent of the vote in Waukesha County in 2010, 2012 and 2014. But in 2018, just 66 percent of Waukesha County voters supported Walker, and his margin there dropped by roughly 18,000 votes compared to four years ago."

In 2018, Wisconsin Sen. Tammy Baldwin received nearly 40 percent of the vote in the county, topping Hillary Clinton's 33 percent in 2016.

In the suburbs of Cincinnati, Ohio, the state's Democratic Party Chair David Pepper hosted a similar event also focused on health care and gun violence - deliberately in Hamilton County, in the southeastern corner of the state.

The county, which has historically backed Republican candidates in national elections, turned blue in 2008, when it sided with Barack Obama - the first Democratic presidential candidate to win the county since 1964. Clinton held onto the county in 2016, carrying it over Trump by 10 points.

Democrats are hoping to solidify their hold on Hamilton County in 2020. Michigan is also expected to be hosting a suburban-focused event this week, as part of the broader push.

But the impact of the push and pull dynamics on the critical suburban vote in 2020 remains to be seen.

"The question going into 2020 is whether those suburban voters continue this trend of moving away from Republicans 2016 and 2018," said Askarinam. "Is 2016 and 2018 a preview of future trends ... or is it the new normal?"
Report a correction or typo
Related topics:
abc newsnational
Copyright © 2020 ABC News Internet Ventures.
More Videos
From CNN Newsource affiliates
TOP STORIES