VIDEO: Victorville suspect punches deputy, grabs gun and fires at her during altercation 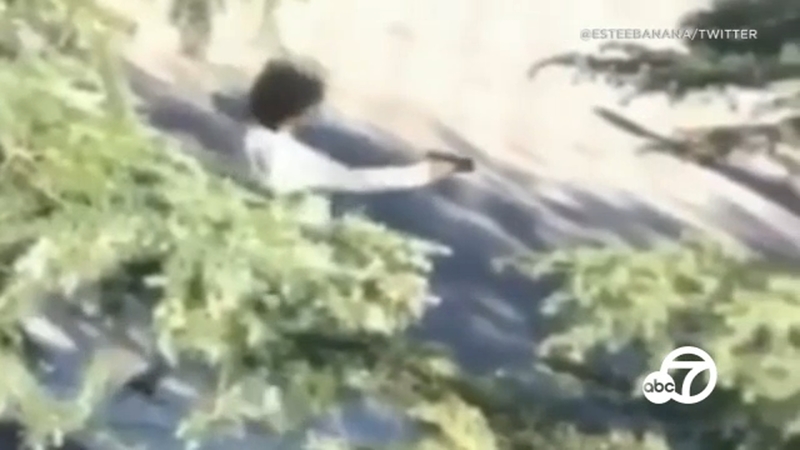 VICTORVILLE, Calif. (KABC) -- A San Bernardino County sheriff's deputy narrowly escaped serious injuries during a deputy-involved shooting in Victorville, which was captured on dramatic video that shows the suspect aiming gunfire at the deputy as she tried to get away.

The shooting occurred just before 8:30 a.m. on Wednesday in front of homes in the 13000 block of Cabazon Court, according to the San Bernardino County Sheriff's Department.

Cellphone video shows the deputy, identified by the department as Meagan Forsberg, in a physical altercation with the suspect. During the scuffle, two shots can be heard going off, then she is seen getting off the ground and running away from the suspect.

The suspect, identified as Ari Young, also stands up armed with a gun, begins walking toward her, and fires at the deputy at least twice. Authorities said Young managed to take control of Forsberg's gun at one point during the altercation.

"That's when a whole army of police came around the corner," said a man who witnessed the episode, "came into this cul-de-sac right here and opened fire on the suspect."

The suspect was taken to the hospital in an unknown condition, according to the San Bernardino County Sheriff's Department. The deputy was injured but was not shot; she is expected to be O.K.

According to a sheriff's spokeswoman Jodi Miller, a "very upset female" called 911 shortly before 8:30 a.m. and pleaded for help, asking authorities to remove her son from her home.

Neighbors said Forsberg arrived at the scene first and tried to arrest the suspect, but the confrontation turned violent.

After Young shot at the deputy, witness Fany Contreras said, he held the gun with both hands, extended his arms in front of his body and again pointed the firearm at her.

"She was so lucky," Contreras said. "She was lucky this time."