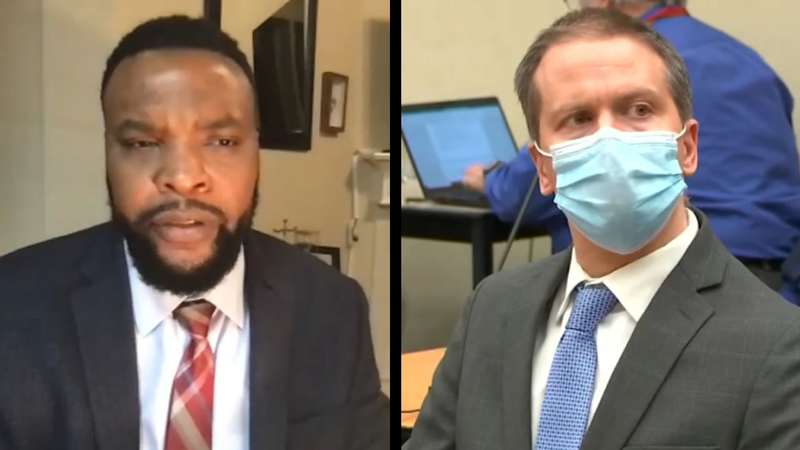 Here's how long attorney thinks Chauvin's sentence will be

Derek Chauvin, the former Minneapolis officer who pressed his knee against George Floyd's neck, was handcuffed and taken into custody Tuesday after being convicted of all three counts against him in Floyd's death.

So what's next after Chauvin's conviction? ABC7 News reporter Kate Larsen spoke to an attorney for the Floyd family about sentencing, and how this case may impact future policy.

"This was a win for today," said Lee Merritt, co-counsel to George Floyd's family. Merritt is a Texas-based civil rights attorney, specializing in police misconduct. He's running for Texas attorney general and represents families across the U.S. whose loved ones have died due to police violence.

Kate Larsen: "Have you spoken directly with the Floyd Family today?"

Lee Merritt: "Yeah, I caught them in a sort of a celebratory moment, moments after the verdict was read."

Kate Larsen: "What are their expectations as we move towards the sentencing phase?"

Lee Merritt: "They want to see the maximum sentencing available; under the charges as they exist, that's 12.5 years. And you know that falls short of their idea of justice."

Merritt will be present for sentencing, which takes place in 45 days.

SEE ALSO: What do the charges against Derek Chauvin in George Floyd's death mean? What's next after conviction?
EMBED More News Videos

He expects former Minneapolis police officer Derek Chauvin to get 10 years. Regardless of prison time, Merritt says the Floyd Family is committed to addressing the culture of policing and violence in America.

"They're gonna push towards legislative outcomes, like the passage of the George Floyd Justice in Policing Act that would make it so the federal government in cases like this could come in with additional charges."

"Those numbers tell me that we can not be pacified by a case like this which essentially represents an anomaly, a very rare conviction of a police officer.

"I would say the cases that are charged are very rare and that number, 143, given how many incidences there are every day between police and people on the street, often which for whatever reason result in some sort of forceful detention, that's a pretty low number. There should be more charges filed."