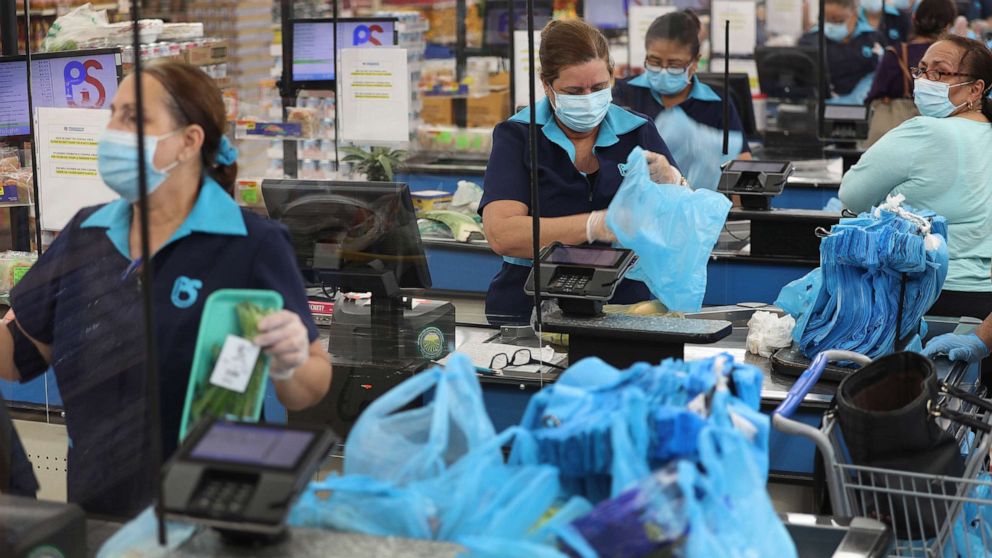 The unfolding coronavirus crisis has dramatically changed daily life in America, shuttering businesses across the country and canceling big events for the foreseeable future.

That's why federal authorities want grocery stores, gas stations and even COVID-19 testing sites to know that they now could be targeted by terrorists determined to strike inside the U.S. homeland - even if such an event is unlikely.

"Now is the time to engage community businesses and other stakeholders to encourage vigilance and awareness," the Department of Homeland Security's assistant director for infrastructure protection, Brian Harrell, said in a statement to ABC News.

On Friday, Harrell's division within DHS, the U.S. Cybersecurity and Infrastructure Security Agency, issued a nationwide notice saying "it is imperative that law enforcement be alert for potential individuals triggered by the pandemic to inflict further harm, and [that agencies] provide residents with information that can augment community safety and security."

The alert noted that while "there are currently no imminent or credible threats, there has been an increase in online hate speech intended to incite violence and/or use the ongoing situation as an excuse to inflict hate."

At the same time, the "potential threat environment" has changed, with "public gathering areas" shifting "to COVID-19 mobile screening stations, gas stations, still-open houses of worship, grocery stores, and other retailers that have been approved to do business," the alert said.

It was the second such warning in as many weeks. Two weeks ago, the FBI, DHS and National Counterterrorism Center issued a joint intelligence bulletin that similarly mentioned grocery stores and still-operational businesses as potential targets.

The bulletin said online conspiracy theories are describing the COVID-19 pandemic "as a government-perpetrated hoax," while other "conspiratorial narratives [are] assigning blame for the pandemic to a Jewish conspiracy or China," which heighten "the risk of retaliatory violence against Jewish Americans and Asian Americans."

Some white supremacists and anti-government extremists are also insisting that the government's response to the pandemic might "hasten societal collapse" and "lead to a race war," according to the bulletin two weeks ago.

"[L]aw enforcement personnel enforcing stay-at-home orders or interacting with citizens, as well as soft targets such as grocery stores, hospitals, and other essential businesses, will probably remain potential targets for [domestic terrorists] during the course of the pandemic," the bulletin said.

Nevertheless, last month, after FBI agents in Missouri investigated a plot to bomb a medical center in the midst of the coronavirus crisis, the FBI office there said in an internal document that it believed racially-motivated extremists were "unlikely" to launch full-scale attacks.

But, the office noted, that "assessment could change."

The two more recent alerts citing grocery stores and other potential targets are among many coronavirus-related warnings that U.S. counterterrorism agencies have distributed in the past two months, with the pandemic posing new challenges for authorities to protect communities.

"Unfortunately, during circumstances such as a pandemic, individuals may be triggered by stressors (e.g., isolation, layoff, etc.) caused by the pandemic to ... commit attacks," Friday's alert said.

But "[f]or many law enforcement agencies, this pandemic has resulted in a significant reduction in bandwidth," the alert noted.

"That day showed all of us in the starkest possible way that hatred and intolerance for the values we all share could come from within our own country, from people we grew up with, who went to our schools, who were our neighbors," Wray said. "We know that terrorism can happen anywhere, at any time."

But, he added, "America at its best" has a way of coming together "during the darkest of times, whether confronting a terrorist attack or, these days, an unprecedented virus."