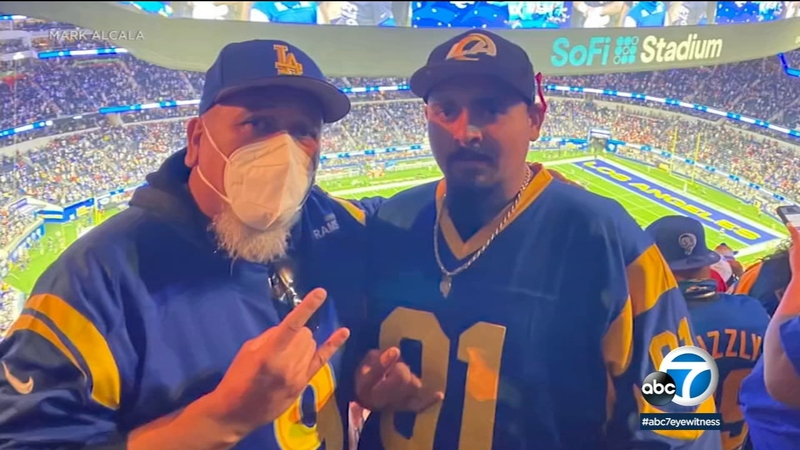 INGLEWOOD, Calif. (KABC) -- A diabetic man from Rancho Cucamonga is furious at SoFi Stadium security officials for refusing to allow him to bring medically required snacks into the stadium, and then ejecting him from the premises when he complained.

It happened before the NFC Championship game between the Los Angeles Rams and the San Francisco 49ers.

"It ruined everything for me," said Mark Alcala. "Even when (the Rams) won I wasn't excited."

Alcala says he is a lifelong Rams fan and is a current season-ticket holder. All throughout the season, security officials had allowed him to bring snacks into the game, such as oranges, crackers and soft drinks. But not during the NFC championship game.

"I already had scanned my ticket, and I was waiting for my son to come back, and they had him right there, 'you're not gonna take that stuff in,'" explained Alcala. "I asked for a supervisor. A lot of times, and they ignored me."

Alcala said he is a type-two diabetic, and he needs the snacks to maintain his blood sugar level. He said if his levels drop too quickly, buying food at the stadium concession stands wouldn't be a viable option.

"It takes a long time to go through that line," Alcala added. "So you bring your own stuff. It's legal to bring it in because it's for medical reasons."

Alcala said when it became clear they wouldn't allow him to bring in his snacks, he became so frustrated he offered to leave them just so he could get into the stadium. But he said at that point they informed him he wouldn't be allowed into the game, and a confrontation ensued.

"I didn't put my hands on the (security officer), but I tried to just push through the guy," said Alcala. "To get to where I gotta go. Like, I wanted to go get my seat. The game was starting."

Alcala said a security official then placed him in handcuffs.

"They were hurting my arm bad, and it could have popped out," he said.

When Alcala's 26-year-old son rushed over to try to pull him away from the guard, he said the guard shoved his son down onto the ground.

"To see your son like that, on the ground, it's not cool," Alcala said.

Eventually, they left the area without being admitted to the stadium. Alcala said employees at the ticketing office later apologized, and allowed him to reenter the stadium, but by the time he got to his seat, it was almost halftime.

"A representative offered to go to a practice and get, like, signatures, but what is that? Is that going to make me feel better after taking my son on the floor?" Alcala said. "I don't want to sue anybody. I just don't want to see that happen to nobody again."

According to its website, outside food is prohibited at SoFi Stadium but exceptions "will be made for those with medical requirements and/or special needs."

In response to Eyewitness News' request for comment, SoFi Stadium provided a statement, which read: