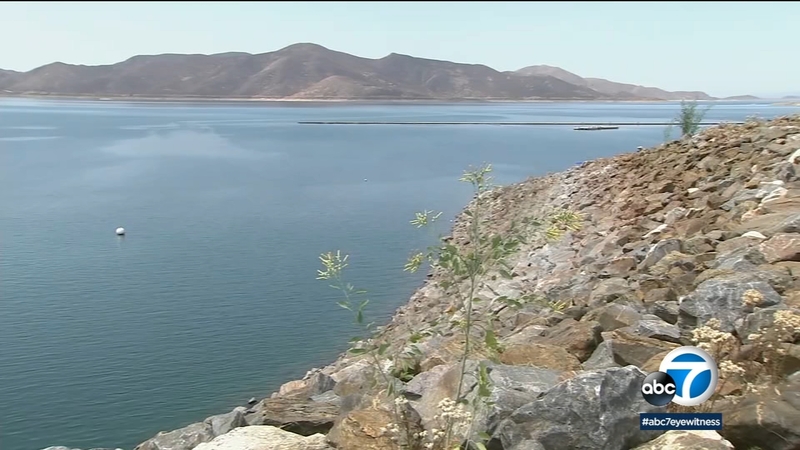 HEMET, Calif. (KABC) -- Southern California's largest reservoir is filled to more than 80% of its total capacity, despite the fact the state as a whole is in the second year of a severe drought.

And Diamond Valley Lake near Hemet is proving to be a key asset in making up for the shortfall in water from other sources after another year of below-normal precipitation.

"The lake has a purpose that helps us in emergencies like earthquakes, but primarily in droughts like this," said Brent Yamasaki, Metropolitan Water District's head of operations.

"It actually holds more water when it's full than Lake Havasu."

Newsom also signed an executive order that encourages residents to reduce their water use by 15% voluntarily. That includes residential, industrial and agricultural areas.

Yamasaki said typically during wet years, Southern California gets most of its water from the state water project, and during dry years the region gets most of its water from the Colorado River. But because water levels at Lake Mead are so low, MWD decided to tap into its storage at Diamond Valley Lake to provide water to parts of northern Riverside County this year.

"It has the most emergency storage that we have in Southern California," said Yamasaki. "You want to save it for last."

Yamasaki said he only anticipates having to use about 15% of the water in Diamond Valley Lake this year, which would still leave the reservoir more than 65% full.

Ever thought about putting Lysol in your toilet? It's one of a few simple things you can do to help as California faces a potentially devastating drought.

"There's a number of years in this lake in terms of drought storage."

When asked why the reservoir is still so full given the current drought, Yamasaki said it's because of conservation efforts throughout the region since the last drought.

"It's really a way of life. Even when it's raining, we still have conservation programs," said Yamasaki. "In the years since the last drought, that conservation ethic allowed us to refill our storage. And we started this drought with record amounts of storage."