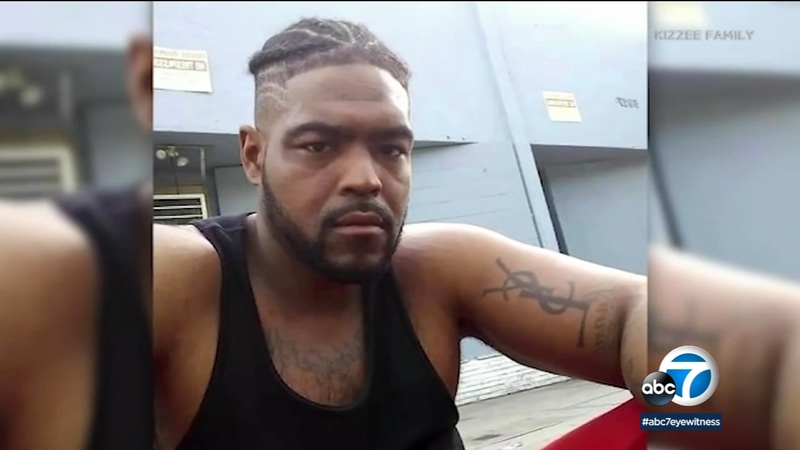 SOUTH LOS ANGELES (KABC) -- The family of a man who was fatally shot by Los Angeles County Sheriff's deputies last summer is seeking $35 million in damages from the county.

Dijon Kizzee, 29, was killed Aug. 31 in South Los Angeles after two deputies tried to stop him for riding a bicycle in the wrong direction. He dropped the bike and ran away, carrying a bundle of clothing that authorities say contained a firearm.

The deputies told investigators they didn't know there was a gun in the clothes and they fired at Kizzee after he picked up the handgun when it fell out during a struggle with one of them. A video showed him stooping down, but a wall blocked a full view. No weapon could be seen in the video, although authorities found a gun at the scene.

Kizzee's family filed a legal claim, a precursor to a lawsuit, Wednesday against Los Angeles County. The sheriff's department said Thursday that detectives are still investigating the case and declined further comment, citing the pending litigation.

Kizzee's family says the deputies' response was excessive and unnecessary.

"He was no animal," his aunt Fletcher Fair said during an online news conference Thursday. "He didn't deserve to die like that and be alone like that."

The family is being represented by civil rights attorneys Ben Crump, Carl Douglas and Dale Galipo. The lawsuit alleges the deputies involved in the shooting were poorly trained, had no reason to stop Kizzee in the first place and that Kizzee was not a threat to the deputies.

"Why all of the shots and why multiple shots when he's unarmed laying on the ground?," attorney Galipo asked during the news conference. "Is that really necessary? Is that what we want our children to see?"

The L.A. County coroner says Kizzee was shot 16 times, with five of the wounds on his back. Meanwhile, the family says an independent autopsy found Kizzee suffocated when his lungs filled with blood. They blame the deputies for not immediately rendering aid to Kizzee and instead retrieving a shield from a patrol car before trying to help him.

"While Mr. Kizzee's lungs were filling up with blood, they approached him like he was some sort of an animal holding a machine gun and pointing it at them," said Douglas.

Attorneys for the family of Dijon Kizzee are disputing the LASD's account of the Aug. 31 fatal shooting.

The sheriff's department referred Eyewitness News to its findings from last year that show Kizzee dropped a gun, then picked it up during the foot pursuit.

"The deputies saw the gun and drew their pistols as Kizzee stopped, bent over, reached back and picked up the pistol. Each deputy fired at Kizzee," Captain Kent Wegener said in September.

Investigators say Kizzee had previously posted a video on social media showing a gun with the same serial number as the one found at the scene. They also say he was a convicted felon who should not have been in possession of a firearm.

But civil rights attorney Ben Crump calls this another case of law enforcement preying on the Black community.

"People of color all throughout Los Angeles know that this is the truth, that this is our reality, that they unjustifiably, unnecessarily and senselessly shoot first and ask questions later," Crump said.

Attorneys say they will mostly likely file the lawsuit in state court early this summer. The sheriff's department's investigation into the shooting remains open.