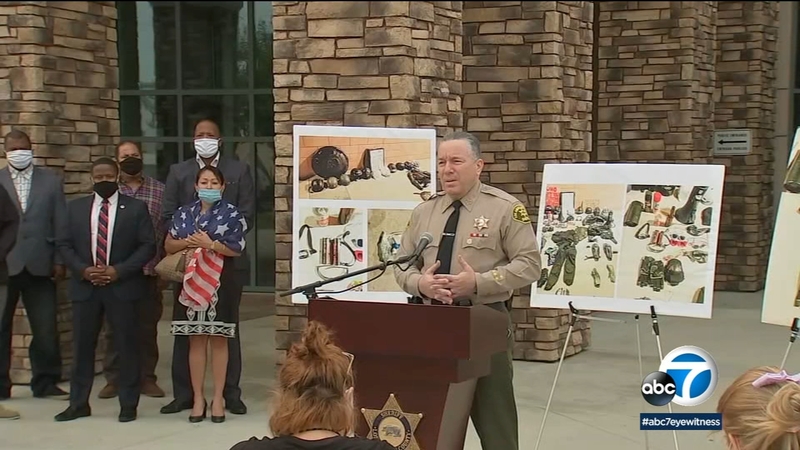 Sheriff Alex Villanueva held a news conference Thursday morning, joined by who he described as community leaders in South L.A., in an effort to tamp down tensions and send a message to violent instigators.

Villanueva has insisted that "disruptive groups" from outside the area have inflamed the nightly protests and only one of the 36 people who were arrested over the past few nights was a resident of the general vicinity.

Demonstrators gathered in front of the sheriff's station in South L.A. as protests continue over the deadly deputy-involved shooting of Dijon Kizzee.

While some are gathering to peacefully protest, he says, outsiders are taking advantage of the gatherings to incite violence.

"They're not there to protest," Villanueva said during an update on Facebook Live. "Come on, let's knock off any pretense that these people are here to engage in the lawful exercise of their First Amendment rights. They're not. Their whole goal is to disrupt law enforcement activities. As soon as something starts flying our way, we will respond in kind and we will declare it an unlawful assembly and then we'll take whatever action we need to stop that. That's it."

"Do not come from out of town into our town causing ruckus, causing violence. The community will push back and we're going to support the Sheriff in their use of force to remove people from our city because they are a danger," Joe Collins, a congressional candidate challenging Rep. Maxine Waters, said at the press conference.

Sheriff's officials said Kizzee was riding a bicycle in the area on Aug. 31 and deputies stopped him for an unspecified vehicle code violation. After he was stopped, he allegedly punched one deputy then tried to run away and dropped clothing items containing a firearm.

Sheriff's officials have said he made a motion toward the gun, but Kizzee's family and community activists have accused the deputies of shooting an unarmed man in the back. They insist he was not wielding a weapon and was actually running away from the deputies when he was shot.

The Los Angeles County Sheriff's Department has requested a security hold on Dijon Kizzee's autopsy as protesters continue to hold demonstrations calling for justice in the deadly deputy-involved shooting.

On Wednesday, Kizzee's relatives held a news conference with supporters, calling on the coroner's office to release the results of an autopsy. The results have been placed on a security hold by the sheriff's department, citing the continuing investigation.

Activist Najee Ali, who is working with the family, downplayed Villanueva's comments that protesters came from outside the area.