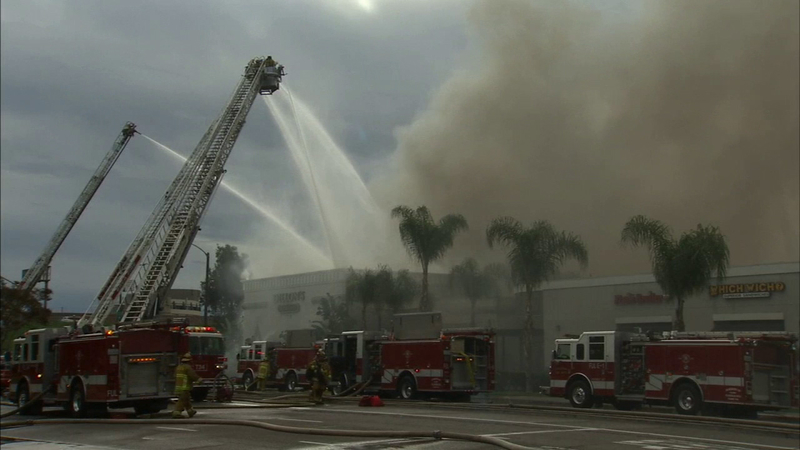 The massive blaze erupted at Dillon's Bar and Grill in the 2700 block of Nutwood Avenue just before 6 a.m.

"There were approximately 80 firefighters here ... it's knocked down; it's just not completely out yet," said Deputy Fire Chief Julie Kunze of the Fullerton Fire Department.

Firefighters work to put out a four-alarm fire at a restaurant off Nutwood Avenue in Fullerton on Sunday, March 1, 2015.

By 9 a.m., the fire was under control, but crews were still putting water on hot spots, and smoke continued to pour out of the building.

The restaurant had just opened in September.

"What can you do? It's a brand new restaurant and I'm very disappointed but thank God nobody was there, that's the most important thing," said owner Abbey Shilleh.

The cause of the fire has not been determined. Authorities say a cleaning crew left the restaurant around 3 a.m. or 3:30 a.m.

Nutwood Avenue and the 57 Freeway off-ramp were closed for hours due to the fire fight. No injuries were reported.

CORRECTION: It was earlier reported that the restaurant name was Cantina Lounge, but the Fullerton Fire Department says the fire was at Dillon's Bar and Grill.