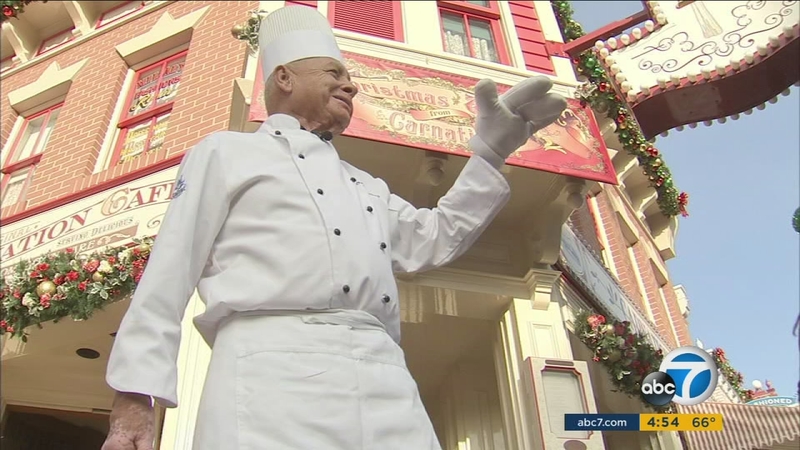 ANAHEIM, Calif. (KABC) -- You could call Oscar Martinez a Disneyland attraction of a different variety. For nearly 60 years, he's been a mainstay at Disneyland in Anaheim.

Some people say Martinez is one of the last real connections to Walt Disney.

The 81-year-old is someone special at Carnation Cafe, located along Disneyland's Main Street, and will soon celebrate his diamond anniversary for 60 years of service there.

Couple Anastasia and Dez Fafara go to the restaurant for the food and for Martinez.

"He's just a beautiful person, beautiful soul. You can see it in his eyes. There's just so much wisdom and history there," added Anastasia.

Snapping a photo with Martinez is one of the greatest souvenirs most people can get when they stop by Carnation Cafe.

And he never tires of talking about how he came to work at Disneyland as a busboy only a year after the park opened.

Martinez managed to whip up some fantastic-tasting breakfast potatoes, which first got him noticed.

"To me, he's just as famous as any of the other characters," said Kathleen McFerrin, a fan of Martinez. "It's like he's part of Disneyland."

He spends less time in the kitchen these days and more time greeting fans. And Martinez insists he isn't going anywhere.

Martinez did, however, fondly talk about Mr. Disney.

"He said follow the dream, and that's what I'm doing," shared Martinez.

It seems if you still like coming to work at 81 years young, that's not a bad dream to keep going.