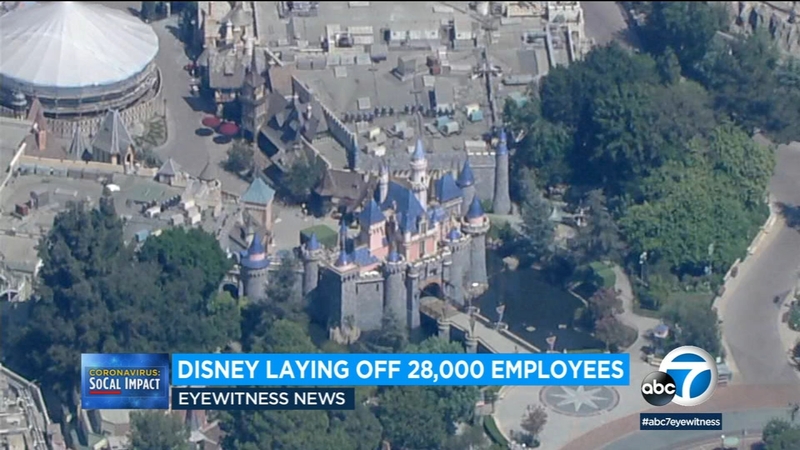 ANAHEIM, Calif. (KABC) -- As Disneyland remains closed during the coronavirus pandemic, Disney announced Tuesday it will lay off about 28,000 employees in its Parks, Experiences and Products division.

About two-thirds of the layoffs are part-time employees.

"In light of the prolonged impact of COVID-19 on our business, including limited capacity due to physical distancing requirements and the continued uncertainty regarding the duration of the pandemic - exacerbated in California by the State's unwillingness to lift restrictions that would allow Disneyland to reopen - we have made the very difficult decision to begin the process of reducing our workforce at our Parks, Experiences and Products segment at all levels, having kept non-working Cast Members on furlough since April, while paying healthcare benefits," said Josh D'Amaro, chairman of Disney Parks, Experiences and Products. "Over the past several months, we've been forced to make a number of necessary adjustments to our business, and as difficult as this decision is today, we believe that the steps we are taking will enable us to emerge a more effective and efficient operation when we return to normal."

The Anaheim theme park closed in March for the pandemic. At the time, employees were placed on furlough and the company continued paying their benefits. Disney officials have been urging the state to issue guidelines that would allow the park to reopen safely.

Walt Disney World in Florida reopened over the summer.

The layoffs were described as impacting domestic employees. But it was not immediately specified how the job losses would be split up among the Disney Parks, Experiences and Products business unit - which includes Disneyland, Walt Disney World, other parks around the world, Disney Cruise Line, Adventures by Disney, Walt Disney Imagineering, consumer products, retail stores, publishing, games and other products.

D'Amaro said part of the reason for the need for layoffs was "exacerbated in California by the State's unwillingness to lift restrictions that would allow Disneyland to reopen."

Six months after closing because of the COVID-19 pandemic, there's still no sign of an upcoming reopening at the Disneyland Resort theme parks and leaders with the city of Anaheim say their economy is feeling it.

Earlier Tuesday, a group of California state lawmakers urged Gov. Gavin Newsom to issue guidelines that would allow theme parks like Disneyland, as well as Universal Studios, Six Flags Magic Mountain and others, to reopen.

CORRECTION: An earlier version of this story stated that Disneyland announced the layoffs. The layoffs impact employees across the Parks, Experiences and Products division.