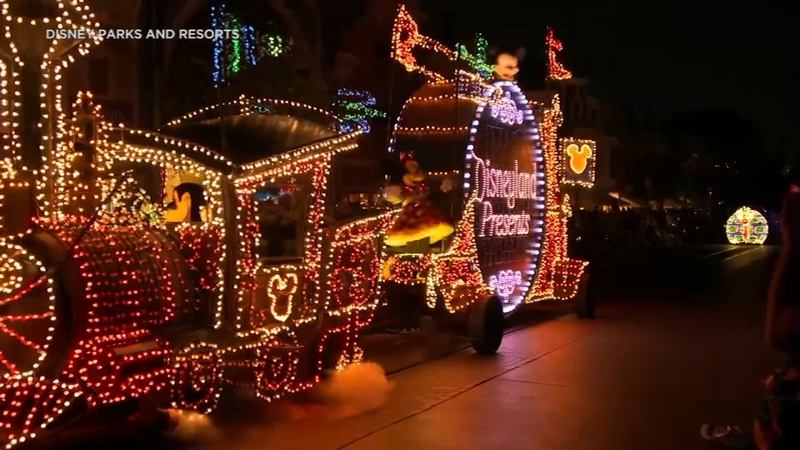 ANAHEIM, Calif. (KABC) -- Exactly 50 years ago, on June 17, 1972, a light show the likes of which Southern California residents had never seen before, rolled down Disneyland's Main Street USA.

It was called the "Main Street Electrical Parade."

Now, for a limited time, Disneyland guests can enjoy a new "enchanted" grand finale sequence honoring the parade's 50th anniversary as it travels across Disneyland Park.

The new finale celebrates the theme of togetherness with a seven-segment float that stretches 118 feet in length, bringing together more than a dozen Walt Disney Animation Studios and Pixar Animation Studios stories.

New music that weaves together songs from the represented stories was created to accompany the new grand finale float.

Composers Jean-Jacques Perrey and Gershon Kingsley wrote the synthesizer piece known as "Baroque Hoedown" in 1967. The song was then adapted for the "Main Street Electrical Parade" for its debut, and was interwoven with classic Disney themes to create the iconic parade soundtrack.

Approximately 500,000 lights sparkle in the parade's nighttime journey, with 22 total floats, nearly double the number of floats in 1972, illuminating the parade route.

"Encanto," "The Jungle Book," "Raya and the Last Dragon," "Aladdin," "Coco," "Mulan," "Brave" and "The Princess and the Frog" are just some of the classic and contemporary scene favorites that guests along each side of the parade route will be able to enjoy.