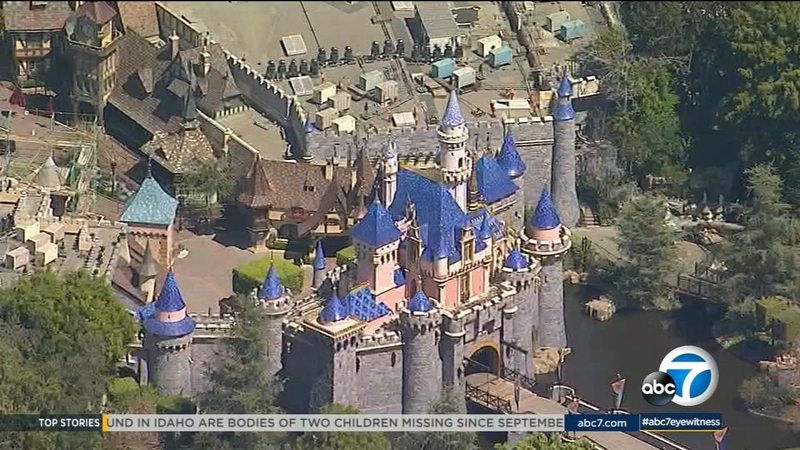 ANAHEIM, Calif. -- Disneyland Resort has announced a proposal to begin a phased reopening of the popular tourist destination in Anaheim on July 9, followed by a reopening of the location's theme parks later that month.

"Sixty-five years to the date after the historic opening of Disneyland park, we are planning to open our theme park gates once again on July 17, 2020," a statement on the Disney Parks blog said Wednesday.

Disneyland and California Adventure were temporarily shut down in mid-March due to the coronavirus pandemic.

The planned July reopenings are pending local and state government approvals, according to the statement.

MOMENT OF HOPE: The Disneyland Resort in Anaheim raised the American flag during a touching ceremony Friday morning at the park, which remains closed amid the coronavirus pandemic.

"We are purposefully taking baby steps during this very intentional phased approach," said Josh D'Amaro, chairman of Disney Parks, Experiences and Products. "As one of the first major theme parks to close our operations and the last to reopen, we have been deliberate about keeping the health and safety of our cast, guests and local communities top of mind."

Visitors can expect capacity at the two theme parks to be severely limited in accordance with governmental requirements and adherence to physical distancing guidelines, as well as wear a face covering. The resort will thus manage attendance through a new park reservation system, Disney officials said. The system will require all guests, including annual pass holders, to obtain a reservation for park entry in advance.

Events that attract large group gatherings, including parades and evening spectacles such as "Fantasmic," will return at a later date, according to the parks blog. Character meet-and-greets will remain temporarily unavailable.

The news comes as Disneyland employees have been off of work for months amid the pandemic. Disney is the largest private employer in Orange County.

Disneyland cast members are thrilled about the reopening.

"It's exciting. It's nice to have the park open again and have the guests come back. It's just very quite right now and it's kinda sad, you're walking through and there's nobody around," cast member Diane Goodman said. "It's a special day if they open July 17, it's Disney's 65th anniversary."

Disney CEO Bob Chapek speaks to "Good Morning America" about plans to reopen Walt Disney World and talks with the NBA to potentially resume their season at a Disney property.