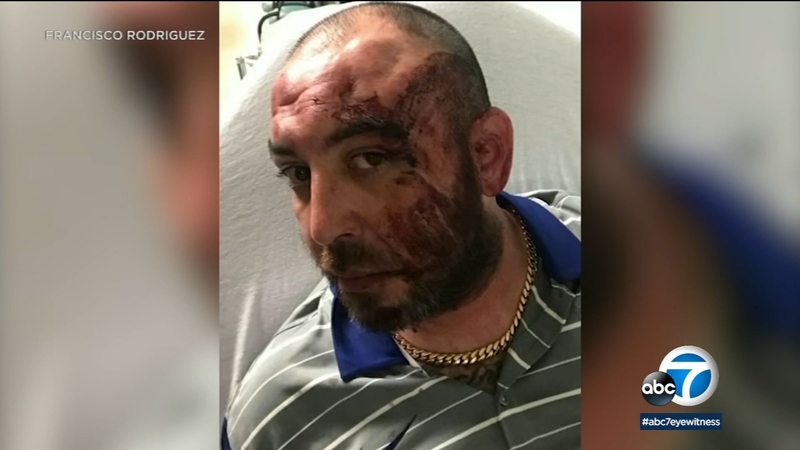 LOS ANGELES (KABC) -- A Dodgers fan who said he was beaten by security at Dodger Stadium after a scuffle is no longer facing a criminal charge that the city had pursued against him.

Francisco Rodriguez said he was beaten by the group of security guards on Opening Day of the 2018 season.

Video shows Rodriguez surrounded by security and Los Angeles Police Department officers, at the end of a scuffle that happened while he was being ejected from Dodger Stadium.

During that incident, Rodriguez said, he was punched and beaten.

An attorney representing Rodriguez has filed a civil lawsuit against the Dodgers.

But Los Angeles city attorneys also filed a battery charge against him, accusing him of hitting a security officer in the face.

Friday his trial for battery ended with a hung jury.

"I feel very good about that because it was a big relief not only for me but for my family, my mental health," Rodriguez said.

The city attorney's office decided to dismiss the case rather than seek a new trial.

Rodriguez claims the incident started when he stood up for another fan who was being kicked out of the game. He asked the security guards what the problem was.

The Norco resident said he's still recovering from his injuries.

"I wasn't able to perform the same way I was able to before that happened to me. I was dealing with a lot of injuries and it has affected me in every way," Rodriguez said.

Rodriguez, a Dodgers fan for more than two decades, said he doesn't blame the team for what happened but he feels the security staff needs better training.

"The Dodgers didn't have nothing to do with that. I'm still a Dodger fan. I will never stop being a Dodger fan and I continue still going to the games just like I did that day," Rodriguez said.