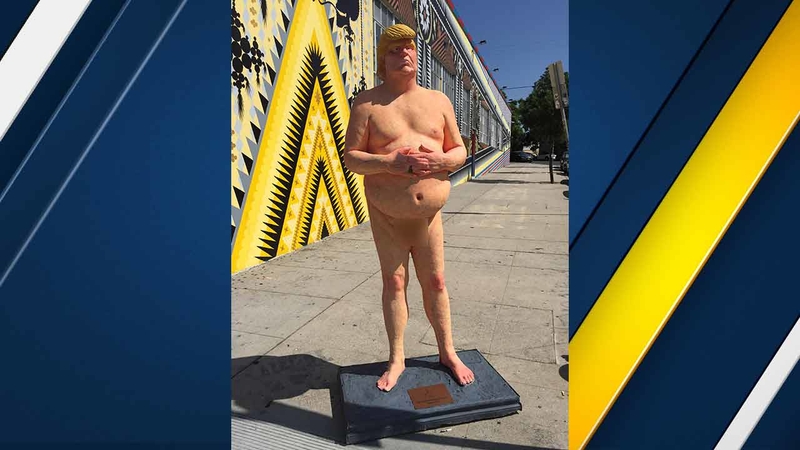 LOS FELIZ, LOS ANGELES (KABC) -- A statue of a stark naked Donald Trump appeared on a sidewalk in Los Feliz on Thursday - and it's not the only place the Republican presidential nominee's likeness showed up in the nude.


They are the brainchild of an activist collective called INDECLINE, which has spoken out against Trump before.

In a statement, the collective said the hope is that Trump "is never installed in the most powerful political and military position in the world."

The statues were created by an artist in Cleveland. They are of a stern-faced Trump with his hands folded over a bulging belly. Some parts of male genitalia are visible while others seemingly are missing.

"It is through these sculptures that we leave behind the physical and metaphorical embodiment of the ghastly soul of one of America's most infamous and reviled politicians," INDECLINE said in its statement.

INDECLINE posted a three-minute clip on its website www.thisisindecline.com, showing how the statues were made.

The footage shows someone creating a detailed mold, which appeared to be used in making all five statues.

A nude statue of Donald Trump is seen in San Francisco's Castro District on Thursday, August 17, 2016.

The end of the video shows a placard on a gray rectangular stand at the bottom of the statue that reads, "THE EMPEROR HAS NO B---S" - INDECLINE.

INDECLINE also took to Instagram to showcase its work, posting a photo from each of the five locations where the naked Trump statues were displayed.

The location tags on two of the photos showed the Capitol Hill neighborhood of Seattle and Union Square in Manhattan. The three other images did not have location tags, just captions that read Los Angeles, Cleveland and San Francisco.

A statue in Union Square quickly drew the attention of people before it was removed by the city's parks department. INDECLINE said statues on the West Coast were still in place.

WARNING: GRAPHIC VIDEO | Watch as a parks worker throws a naked Donald Trump statue into the back of a truck at Union Square in New York City.

This isn't the first time Trump was the subject of something like this. Last month, a street artist known as Plastic Jesus built a tiny wall around Trump's star on the Hollywood Walk of Fame.