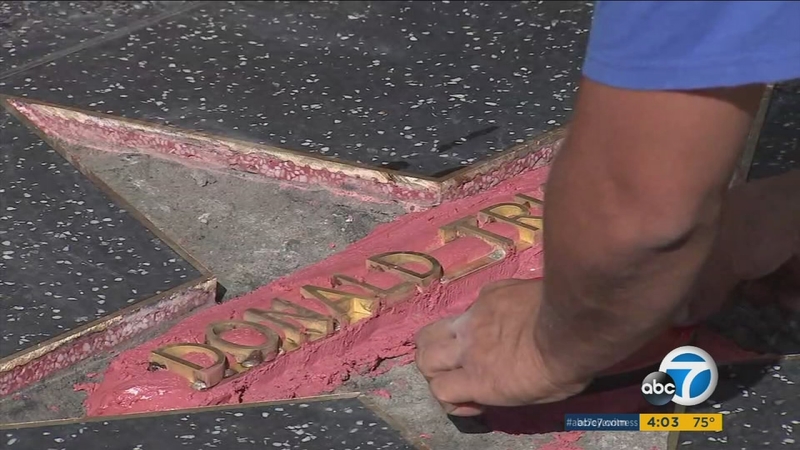 HOLLYWOOD, LOS ANGELES (KABC) -- Donald Trump's star on the Hollywood Walk of Fame was targeted by a vandal who smashed it so badly that chunks of the star were missing from the sidewalk.

Los Angeles police received a report on Tuesday that someone was threatening to vandalize the star. When officers went to check it out, the damage had been done.

Exclusive video from Deadline Hollywood shows a person dressed as a construction worker smashing the star with a sledgehammer and pickax.

The words were scratched off, and the brass medallion is gone.

Police set up a tent to cover the star and placed traffic markers around it. Extra officers are patrolling Hollywood as a result. Work is already underway by the Hollywood Chamber of Commerce to replace the star.

The man, who identified himself as James Otis, told a camera crew that he was destroying the star because of the sexual assault allegations against Trump.

"I have four or five family members (who were) sexually assaulted," Otis said. "I'm terribly upset that we have a presidential nominee who's become the poster child for sexual violence."

He said he planned to sell pieces of the star and give the money to women who were allegedly sexually assaulted by Trump.

Multiple witnesses say the vandal, dressed in construction worker clothes and carrying a barrier, started hammering away at the star around 6 a.m. - and nobody questioned it.

The Hollywood Chamber of Commerce released the following statement from its president and CEO Leron Gubler regarding the vandalism:

By midday Wednesday, repairs on Trump's star were already underway. The brass lettering was reinstalled and then the terrazzo will be poured, which takes several days to season, Gubler said.

Donald Trump's star on the Hollywood Walk of Fame is seen after vandals targeted it on Tuesday, Oct. 25, 2016.

"Once we deem it's ready, they'll come back and polish the star. It will look as good as new," Gubler said.

The damage is estimated at $3,000, which means the suspect could face felony vandalism charges. Otis is expected to turn himself in, possibly as early as Thursday.

Repairs were underway Wednesday after Donald Trump's star on the Hollywood Walk of Fame was vandalized.

Trump's star is located on Hollywood Boulevard between Orange Drive and Highland Avenue, right across the street from the El Capitan Theatre.

Trump's star has been targeted by vandals in the past, but this is the worst damage it has seen. It has also been used by a street artist, who built a tiny wall around the star back in July.

"The Donald Trump star - I have to clean it usually three times a day," said Omar Ruvalcaba, a Hollywood Alliance maintenance worker. "I don't want to but I have to, you know? It's my job."

Investigators gathered evidence at the scene which included the suspect's vest, hat, pickaxe and sledgehammer.

LAPD says when caught, the suspect will face felony charges.

"Because it is a felony, could be prison time, any felony is punishable by more than a year in state prison," a police officer at the scene told Eyewitness News.