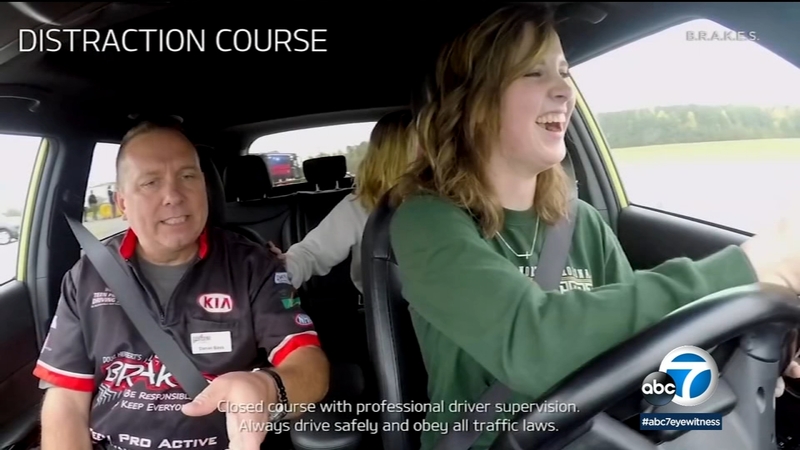 POMONA, Calif. (KABC) -- A car skidding, seemingly out of control. That's something any parent of a teenage driver probably doesn't want to think about.

But on the expansive tarmac at the Pomona Fairplex, things like this are done on purpose, as teaching tools.

"Showing them how to deal with things that they're eventually going to for sure deal with on the road, but in a controlled situation, with a professional instructor in the car. It's unbelievable," said Doug Herbert, the founder of the B.R.A.K.E.S. program, which stands for Be Responsible And Keep Everyone Safe.

It's a free advanced driving program. A positive, born out of tragedy.

"Jan. 26, 2008, I got the phone call that my two teenage boys were killed in a car crash," said Herbert, a former NHRA Top Fuel drag racer.

So to do something about the problem of teenagers being killed or hurt in car crashes, Herbert decided to use his contacts in the car racing world to get the program started. Students are taught car control, skid recovery, and what to do if two of a car's wheels should leave the pavement. And of course, that elephant in the room, distracted driving.

"We'll literally put a device in the teen's hand. We use a calculator, and the calculator simulates that they're texting a number. And we'll have the passenger, the instructor riding shotgun, become an obnoxious, distracting passenger," said Matt Reilly, the lead instructor at B.R.A.K.E.S.

It's all taught in an environment that's both educational and fun, well away from public roads. For the teenagers, getting to spin a car without consequences is more like a day of play than a day of school. And B.R.A.K.E.S. wants the parents to participate too. Mom or Dad may be inadvertently passing along bad habits, like texting while driving.

As the program grew over the years, something rather fortuitous happened. Herbert had been renting cars for the classes, but then a parent of a student happened to be connected.

"He give me his card and he said, 'I'm with Kia and we want to make sure that you don't have to rent cars anymore. We'd love to provide vehicles for this'," said Herbert.

Kia now supplies various models from their new vehicle fleet for the program. This also means that the students are learning in cars with the latest safety technology.

They do as many of these programs as they can, traveling around the country to spread the training.