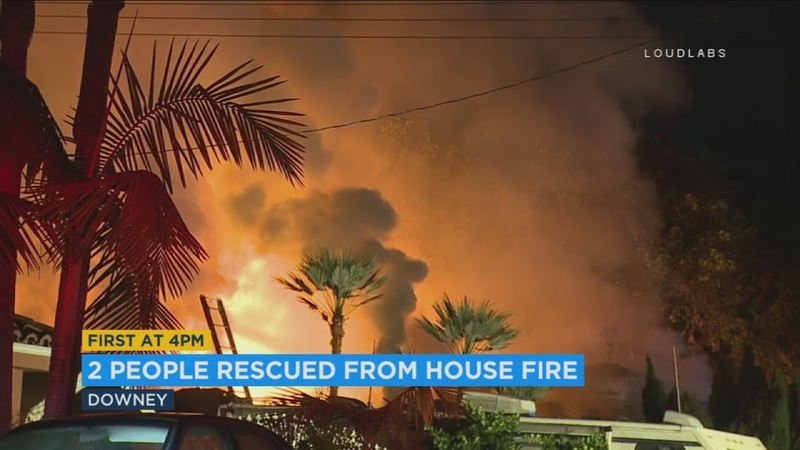 DOWNEY, Calif. (KABC) -- An elderly man and his adult daughter are in critical condition after a fire destroyed their Downey home.

The fire was reported just after 1 a.m. at a single-story house in the 9000 block of Raviller Drive.

The man and his daughter were asleep inside when the flames broke out. Firefighters jumped into action,

Firefighters jumped into action, starting an aggressive fight and going into search-and-rescue mode.

The father and daughter were rescued from the home and rushed to hospitals. Both were in critical condition.

Neighbors say the man's elderly wife, who also lives at the home, was in the hospital for a medical issue when the fire broke out.

"I've lived here for 26 years and nothing like this has ever happened before - no type of major fire," said George Gabriel, who lives across the street from the home. "Which leads to the point of shock - you're like I've never seen this before, I've never seen it in such proximity to our house."

Firefighters believe the flames broke out in the garage. They are still investigating, but don't think the fire is suspicious.

In the daylight, the extent of destruction became clear. The roof was caved in, the windows are blown out and charred cars are sitting in the driveway.

Firefighters stayed on the scene Saturday morning dousing hotspots and continuing their investigation.

Family members say the victims' dog, Auzzie, went missing after the fire and are hoping someone will come forward with their pet.

An undated photo of Auzzie, a family dog that went missing after a couple lost their Downey home in a fire on Saturday, Nov. 18, 2017.