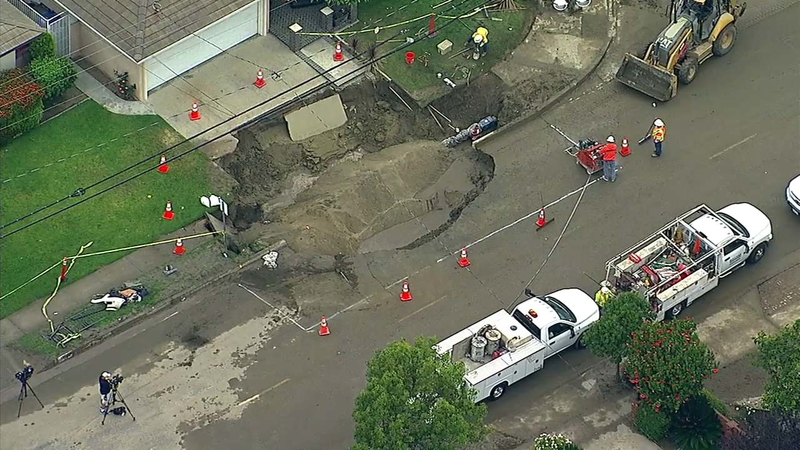 DOWNEY, Calif. (KABC) -- Crews worked Monday to fix a large sinkhole in Downey that swallowed up a vehicle and a part of a street following a car crash over the weekend.

It all began Saturday night when an SUV crashed near the 12000 block of Rives Avenue and sheared a fire hydrant as well as a power pole.

The driver stayed on scene and was not transported, police said. She told authorities that she swerved to miss an oncoming vehicle traveling the wrong way on the road.

Gushing water from the hydrant soaked the ground, which contributed to a sinkhole opening up on Rives Avenue. That sinkhole swallowed up the car involved in the initial crash. The driver was no longer in the vehicle, which was eventually removed from the sinkhole by a tow truck.

Area residents were without water and power for some time. All services were expected to return to normal Monday morning, but it was not known when the road repairs would be completed.

Crews still making road repairs in Downey after a sinkhole swallowed up an SUV yesterday. Driver is OK. @ABC7 pic.twitter.com/pZFPqGcanC