KABC
DOWNEY, Calif. (KABC) -- A service dog, who was stolen from a Downey veteran along with his car, has been found safe at an Anaheim park, and the two have been reunited.

Veteran Apolonio Munoz said he received a call from the Downey Police Department Tuesday saying someone saw his service dog Marcee at a local park in Anaheim.

Apolonio Munoz poses with his service dog Marcee, who was stolen along with the veteran's car.

When Munoz went to the police station, he was greeted by Marcee, who was excited to see her owner.

"She's now home safe in her bed won't leave my side and the roommate's dog is snuggled up with her giving her lots of attention and kisses," Munoz said on his Facebook post.

Munoz said he drove to an AM-PM store Saturday night and left the vehicle running with the air on for the 10-year-old pup and went inside to get a soda.

"Not even in the store 5 minutes and come back out and she's gone," he said.

Someone stole his red Honda Civic coupe with Marcee inside. Munoz said he didn't bring her into the store because her service dog vests and tags were at home.

The Army veteran adopted Marcee two years ago. He said he was in denial about his PTSD for a long time after one deployment in Baghdad. But bringing Marcee into his life has been a tremendous help.

"There's days I just don't want to get out of bed to be quite honest. Since I've had her, she's like no, you need to get up and let me out. And when it's time to go to work, she's like, OK let's go," he said.

"Marcee and I are truly grateful to everyone for their help and support during this difficult time," he said.

Downey police said Munoz's car was located in the city of Norwalk. The thief remains at large. If you have any relevant information about this case, you're urged to contact Downey police at (562) 904-2308 or Detective Nathan Weinrich at (562) 904-2332. You can also submit anonymous tips by calling Crime Stoppers at (800) 222-TIPS.
Report a correction or typo
Related topics:
downeylos angeles countyanaheimorange countydogstheftstolen cararmydogs stolenmemorial dayveteranservice animal
Copyright © 2021 KABC-TV. All Rights Reserved.
RELATED 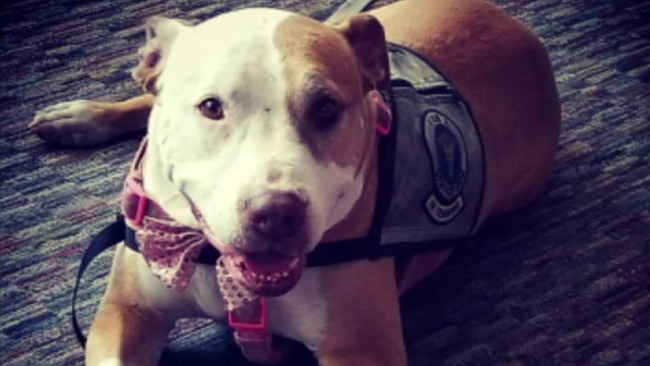