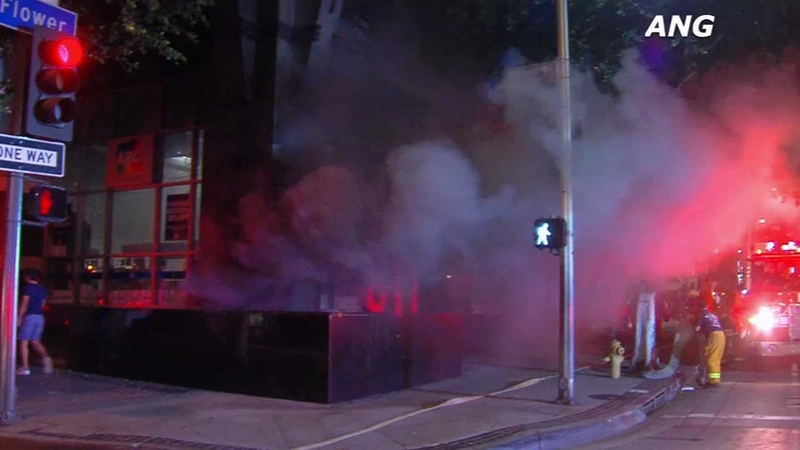 DOWNTOWN LOS ANGELES (KABC) -- An electric generator erupted at the base of a high-rise building in downtown Los Angeles Thursday, injuring four people.

The explosion happened around 10:15 p.m. in the basement of a 19-story commercial building in the 800 block of West Wilshire Boulevard near Flower Street. A fire broke out, but it was quickly knocked down by firefighters.

Los Angeles Fire Department spokesman Brian Humphrey said four people were assessed for injuries: a woman with head pain and a man with back pain were taken to hospitals, while one adult declined treatment and another just walked away.

Crews from the Los Angeles Department of Water and Power were at the scene to assist with a water issue in an underground level. The blast broke some pipes and flooded part of the basement.

"Though there was widespread damage, initial fears for the building's structural integrity proved unfounded. The building was however "red-tagged" as being temporarily unfit for occupancy by the Department of Building & Safety, until electric service and fire safety systems could be restored," the department said in a statement.

The explosion temporarily knocked out power to the Staples Center during a Shania Twain concert.

We had so much fun in LA that we blew the power out! We came back up within minutes and kept rocking @STAPLESCenter! 🙌🏼 #rockthiscountry

At least 12 buildings remained without power Friday morning, and Flower Street was closed at Wilshire Boulevard. The power was restored late Friday afternoon.

The cause of the blast at 811 Wilshire remains under investigation.