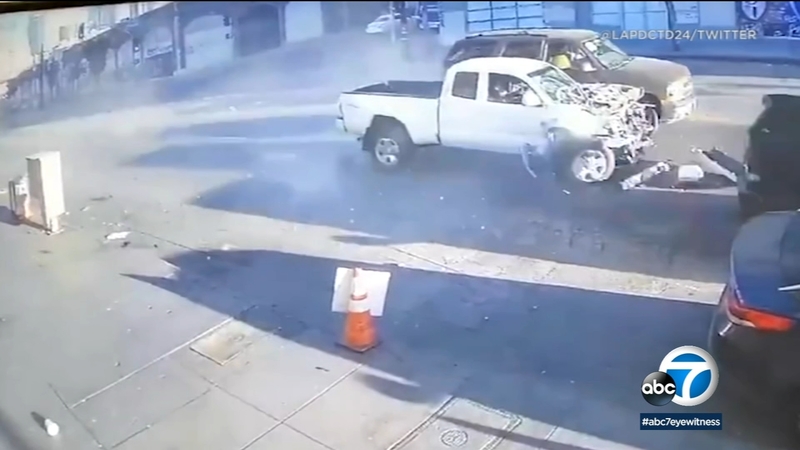 DOWNTOWN LOS ANGELES (KABC) -- Authorities are searching for a suspected hit-and-run driver who left a bicyclist to die in the street in downtown Los Angeles after he had allegedly carjacked the vehicle from a newspaper delivery man just a short while before.

It started Saturday morning when the suspect approached a newspaper delivery person in the 900 block of Wilshire Boulevard and asked for a ride. Detectives say the man left his keys in the car, and when the suspect started driving away, he jumped onto the bed of the truck to try and stop him from getting away with the car.

The delivery man hopped off the moving vehicle a few blocks away and only suffered minor injuries.

"Witnesses on 7th Street saw this truck driving at a high rate of speed, weaving in and out of traffic and driving in opposite lanes of the roadway," said LAPD Detective Juan Campos.

Surveillance video from just a few blocks away shows the suspect behind the wheel of the stolen truck hit an innocent bicyclist from behind.

The footage shows the car continuing to move forward, crashing into two other vehicles. The suspect then exited the mangled truck and walked away.

The victim, Branden Finley, was on his way to meet friends for a morning bike ride when he was struck. He was pronounced dead at the scene.

Family and friends gathered with candles and flowers Saturday night to mourn the 46-year-old father of two.

"I still don't even think it's real. I feel like it's a dream. Right now, it's a nightmare and I feel tomorrow I'm going to wake up and this day will never exist," said his daughter, Koi Finley.

As the LAPD continues to search for the suspect, Finley's family is hoping the public will be able to help put the suspect behind bars.

Detectives say the suspect changed out of the blue sweatshirt that he was seen wearing in the surveillance video and is now believed to be wearing a white sweater.

Campos added that he's wearing black pants and was barefoot, signifying that he may be homeless.

A $50,000 reward is being offered for information leading to his arrest. Anyone with information is urged to contact detectives at (213) 833-3713 or 31480@lapd.online.
Report a correction or typo
Related topics:
downtown lalos angeleslos angeles countytraffic fatalitieshit and runlos angeles police departmentsurveillancehit and run accidentcarjacking
Copyright © 2021 KABC-TV. All Rights Reserved.
More Videos
From CNN Newsource affiliates
TOP STORIES