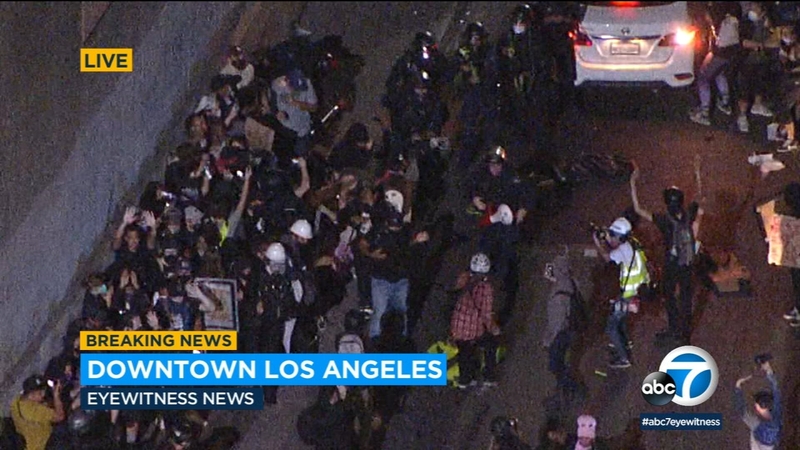 DOWNTOWN LOS ANGELES (KABC) -- LAPD officers faced off with protesters in downtown Los Angeles after they were seen spray-painting and blocking streets.

The group of perhaps 100-200 people blocked downtown streets as they kneeled in the roadway. Several protesters were seen spray-painting anti-police slogans on downtown buildings such as the U.S. Bank tower.

Protests have been held downtown several times this week against police brutality, amid renewed calls for reform after the shooting of Jacob Blake in Kenosha, Wisconsin.

Cars were seen trying to navigate past the group, even weaving through the middle of them in an effort to pass the blocked intersections. The group stopped at several intersections then went on the move again several times through the course of the evening.

Scuffles broke out and officers were seen shoving people back during another night of protests in downtown Los Angeles.

By around 11 p.m. when they marched into the tunnel on Third Street at Flower Street, police moved to contain them at both sides of the structure.

Within a few minutes there were scuffles breaking out in the crowd and officers were seen shoving people back and taking several in the group into custody. They were also forcing dozens of the protesters to crowd back against the walls of the tunnel. A brief melee broke out but officers soon get the crowd under control.

LAPD said about 10 people were detained.